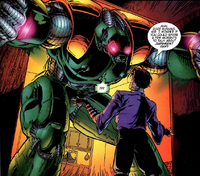 Charles Sweeney was born in Cleveland in 1946, and since his childhood he wanted to weigh fifteen hundred pounds and have ground-to-air bazookas on his shoulders. His dream got real during adulthood when his brain was put inside a hulking machine, becoming the cyborg H.A.R.M., though the removal of his frontal lobe left him without traces of personality and got estranged from his wife. H.A.R.M. became a member of the Troika.

The Troika first appeared working for the Gnome, helping him to retrieve the orb from Helspont. After the Gnome was defeated by Emp, the Troika fled.[1]

When the Troika, working for Tapestry, faced the WildC.A.T.s again, H.A.R.M. was taken down by Huntsman, who manipulated his artillery to defeat Attica. H.A.R.M. got on his feet again, but Zealot rigged a steel beam to hit him and make him fall on Slag, whose lava blood further damaged him. The heavily damaged H.A.R.M. made a last attempt against the heroes by shooting them at a distance while they were distracted, but he was taken by surprise by Grifter, who shot H.A.R.M. from behind.[2]

When Savant assembled a new version of the WildC.A.T.s, they took a more proactive approach, and their first target was H.A.R.M., who was attacked while he was alone in the then-current hideout of the Troika. Ladytron removed H.A.R.M.'s helmet, exposing his organic brain, and Condition Red killed him by shooting the brain, despite Mr. Majestic's protests.[3]