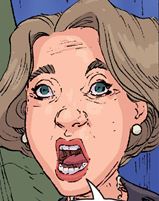 Charlotte Pickens is an opposing candidate to Jack Northworthy as primary candidate. She was viscous in her debating skills and embarrassed Jack in a public debate which caused him to enter a frenzy and attack the host.[1]

Retrieved from "https://imagecomics.fandom.com/wiki/Charlotte_Pickens_(Citizen_Jack)?oldid=55873"
Community content is available under CC-BY-SA unless otherwise noted.