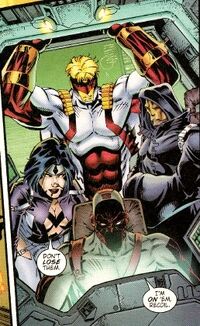 The Chasers is the name of a superhuman team from the Wildstorm Universe. They first debuted at the end of Issue #2 of the Backlash comic book series, but they first appeared in action in issue #7.

The Chasers were a team of superhumans employed by the United States government. They consisted of four members including their leader and strongman Brawl, the telepath Gaze, the rookie Homicide and the hand-to-hand combat specialist/martial artist Recoil. This team was specifically formed with the sole purpose to counteract superhuman threats. They were first seen ordered to hold in custody, Amanda Reed codenamed Taboo at Stonewall Federal Armory. This was part of a trap to capture her once-boyfriend and sole ally (at that time) Marc Slayton, codenamed Backlash.

During Backlash's rescue mission, The Chasers were instructed to take on the escaping Taboo and her newest ally Dingo, who had just broken into the armory base. However, Backlash's arrival complicated their mission to capture Dingo and Taboo. Backlash took on Chasers members Homicide and Gaze when he first infiltrated the base. Easily besting the brash Homicide, it was more of a challenge to overcome the more experienced team member Gaze, who attacked Backlash with psychic powers, including overwhelming his mind with traumatic memories. Ultimately, something in Backlash's alien heritage countered the effects of Gaze's mental powers and neutralized him. Meanwhile, the powerful Brawl acted alone, confronting Dingo and Taboo during their attempted escape. Dingo's hand-to-hand combat skills proved ineffective against the high-level resistance of Brawl, who easily floored Dingo with a single punch. Taboo joined in the action when Chasers team member Recoil attempted to blindside Taboo with an attack. However, Taboo countered and bested Recoil in their brief skirmish.

Backlash still had Homicide to deal with one last time as he attempted to find Taboo quickly. Springing an ambush, Homicide nearly killed Backlash with a gunshot, but was thwarted by a well-time counter from Backlash's Psi-Whip, throwing off Homicide's aim. The resulting blast allowed Taboo and Dingo to drop down through several floors, escaping the rampage of Brawl. Finally, with Backlash and Taboo reunited and now joined in their escape by Dingo, the trio made a run for the one of the base's subway train-like sleds. The Chasers pursued them, but lost them in the unfinished tunnel, resulting in an explosive crash with Dingo, Taboo and Backlash barely escaping their sled.

The Chasers caught up moments after the three fugitives fled the crash site. The Chasers vowed they would track down Taboo soon enough once they began their back-up plan.

Equipment: None known.
Transportation: Teammate Gaze used his ability to fly to get around. Teammate Homicide rode a motorcycle. Altogether, the team once used a hyper-sled.
Weapons: Only teammates Recoil and Homicide used any known weapons. Recoil used a three-section staff. Homicide used a pair of Energy Projection-based weapons. These resembled laser-like whips emitted from hi-tech wristbands. Homicide also used an automatic pistol.

Retrieved from "https://imagecomics.fandom.com/wiki/Chasers?oldid=49656"
Community content is available under CC-BY-SA unless otherwise noted.