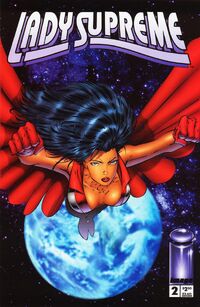 This planet. These people. They need me. It's not important whether i like it or not. All that matters is i'm here, and deep inside i know my family's counting on me!

Lady Supreme is the daughter of the superheroes Supreme and Glory.

Born in the future, she is given up for adoption to another family to keep her safe but over time she begins to show telepathic abilities and joins the other heirs of the Supreme legacy.

Arriving in the past she meets her father and helps him in the battle against Khrome but soon after she is forced to exchange her body with that of her brother Val-En when he finds himself in danger while in a state of unconsciousness. Returning to Earth shortly after the apparent death of her father, she finds herself amnesiac and in her brother's body, after a certain period in which she learns to control her new powers and in which she looks for answers about her past she accepts the mantle of protector of the Earth.

After many adventures including a confrontation with his brother Val-En (who was discovered to be alive in another body but hopelessly mad), Probe returns to her original appearance and becomes the protector of an alternative Earth left without Supreme.