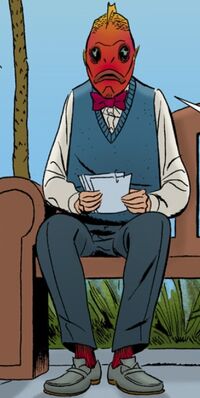 Chester G. is a family man with a past he can't let go.

He works at the Los Angeles Public Library as a librarian who documents people's search histories.[1] He hired P.I. to take pictures of Leanne, the first girl he ever kissed. However, PI later advised him to return home to his now wife instead of trying to contact her.[2]

Later, PI needed help from Chester to let them into Library where he could look into the recently murdered Taj McGill's search history. When PI offered the contact information of his past girlfriend, Chester finally agreed to let them into the library and retrieve the necessary information.[1]

However, upon entering they are pressed by another librarian, Ashleigh. After a short chase, the crew escaped only to end up in a car chase.[1]

Retrieved from "https://imagecomics.fandom.com/wiki/Chester_G._(The_Private_Eye)?oldid=46729"
Community content is available under CC-BY-SA unless otherwise noted.