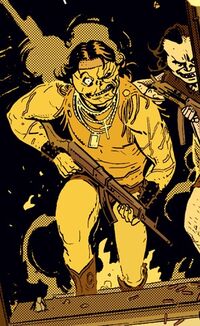 Chester Wilson, aka F-face has an attraction to animals. He was roommates with Marcus Arguello at the Sunset Boy's Home. He would torture Marcus frequently and have him bring him food from the cafeteria. During Marcus's escape from the school, F-face was badly burned in the pin and bomb explosion.[1]

F-face hunted Marcus through San Francisco. When he found him, he kidnapped Chico's body as leverage against them.[2]

When his hideout in the Tenderloin was discovered, the students planned a raid. F-face was prepared and laid a trap for the students. Their skill was still too advanced and his crew was overtaken. While hunting Marcus in the basement, one of F-face's bullets killed their old schoolmaster Mrs. Rank. Shortly after, Marcus released F-face's tortured dog, Peppermint, who attacked F-face and ripped out his jugular, killing him.[3]

Retrieved from "https://imagecomics.fandom.com/wiki/Chester_Wilson_(Deadly_Class)?oldid=67252"
Community content is available under CC-BY-SA unless otherwise noted.