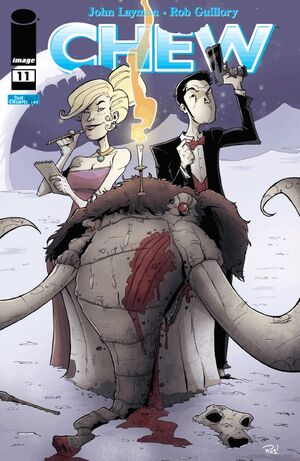 Twenty thousand years ago, a prehistoric man can be seen hunting two sabertooth tigers who have recently taken down a wooly mammoth. He takes out one of the tigers but the other kills the man.

In Philadelphia at the U.S. Food and Drug Administration Headquarters, Mike Applebee uncharacteristically walks around the office in a cheery manner. He happily greets Tony Chu and tells him he's happy he got his new cybernetic ear that was the wrong color.[1] When Mike sees Tony is reading about Vampires he starts to lose his composure and become the grumpy leader they all know, but stops himself and smiles while walking away. Tony is shocked and demands to know what John Colby did while he was away to cause him to act so differently.

John is interrupted by his desk phone ringing. He picks it up, and an unknown caller speaks in code to him. After become frustrated, the caller directly asks to speak with Mason. When he realizes this isn't Mason, he hangs up the phone. A second later, John's phone rings and he immediately goes off on the alleged prank caller. After he stops, he's told by the person on the other line it's a call to investigate a murder case. John instantly snaps back to normal and grabs Tony to investigate.

At the Meadow Green Downs race track. they find the dead man tied to a chair, stabbed with a pitchfork, and has a rare animal stuffed in his mouth. They find out the man is the son of David Hamantaschen who was murdered earlier which instigated their research into Gardner-Kvashennaya.[2] John uses his cybernetic eye to identify the creature as a grey-tailed pygmy marten, a rare and endangered species.

When they see the USDA arrive, John tells Tony to scarf down the creature to find out what happened. The guard immediately screams at them for what they are doing, freaks out and pukes. Tony receives a vision from his Cibopathy and leads them to Amelia Mintz.

At the Mercury Sun, Amelia informs them that she knew David Hamantaschen Jr., he was a lead on a case she was working on. Colby takes her notes and analyzes them with his cybernetic eye. While he's distracted, Amelia tells him about DHJ's involvement in the exclusive Bon Vivant Diner's Club, a group that engages in highly illegal activities to eat rare and exclusive animals, sometimes causing extinctions. She tells Tony she has a ticket with a +1 spot if he wants to check it out.

That night at the Diner's Club, John Colby sits outside in a surveillance van as Tony and Amelia head in with their ticket. They see on the walls that they are eating a Sabertooth tiger eating a prehistoric man from twenty thousand years ago. They read the newspaper articles about how they murdered and stole these remnants from museums and archaeologists. Upon eating their meal, Tony confirms this is indeed the case and pulls his gun to arrest everyone. The club scoffs as they feel they are so rich they can buy him off. When Tony refuses, a man grabs Amelia as a hostage. Surprisingly, Tony blows two bullets through the man's head. Amelia looks shocked and Tony apologizes as this is their first date. She tells him the second date will be even better.

Amelia is sound asleep in her bed and Tony lays next to her with a huge smile on his face.

Retrieved from "https://imagecomics.fandom.com/wiki/Chew_Vol_1_11?oldid=53177"
Community content is available under CC-BY-SA unless otherwise noted.