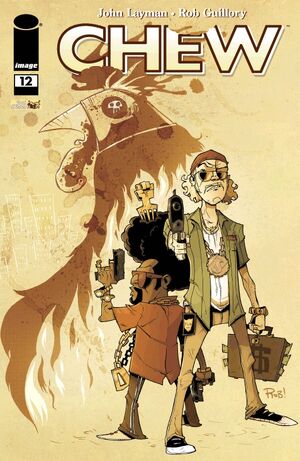 Raymond Kulolo is cornered in an alley. A nearby announcer describes a fight about to occur inside a building. Raymond Kulolo is beaten to death at the same time the announcer is describing a brutal beating in the nearby ring fight. The first is revealed to be a cage fight with chickens, and Poyo is seen standing over the eviscerated bodies of several chickens as the audience looks on in horror.

In Philadelphia, Amelia Mintz and Tony Chu sit discussing Amelia's lost transcripts on Yamapalu.[1] Amelia offers a course of Saboscrivner fine Puerto Rican food for Tony to read, but Tony is distracted by a phone call and takes off.

At an FDA debriefing, Mike Applebee gives information on the murder of Kulolo. Chu interrupts him on knowing Kulolo and also knowing it was over Poyo since he was on the island. Applebee momentarily loses his temper again,[2] but regains composure and leaves the room. John Colby explains his bedtime activities he performed to distract Applebee.[3] Tony is shocked at what John has done but is interrupted by Applebee walking into the room with D-Bear. Applebee explains D-Bear is Tony's new partner and both John and Tony freak out.

Later that night, at a diner Tony is dressed as a thug and D-Bear tells him he still walks and talks like a cop. D-Bear explains Poyo fights like a demon and it won't be easy sneaking Tony in undercover to an event. They are targeting Butcher Jones. A man can be seen eating reciting all the ingredients in the food across the way. Suddenly, it is announced that Mr. Jones will now see Tony and D-Bear.

Jones takes the 40k they brought in money, tells them no deal, and then kicks them out. Tony pulls out his gun, and Jones being an overly cautious individual, hits a button pulling up a bullet proof glass. His henchman pull out automatic weapons on Tony. Jones tells him he might pull off one bullet, he better make it count. Tony points the gun at Poyo's cage, and shoots the lock off. With lightning speed the bird rips apart the henchman and Jones.

As they site outside with the clean-up crew, Tony puts it together that D-Bear knew that Jone's would do this as he had a price on his head. He asks D-Bear why he did it. D-Bear smiles knowing he got caught, he explains he heard that he had gone toe-to-toe with Mason Savoy, and anyone that can do that can handle himself.[4]

A week later, Tony and Amelia are about to eat dinner when Tony answers his phone again. Amelia tells him this better not be one of those relationships where he constantly puts work before her. A work that he hates, with an even worse boss. Tony smiles, clicks his phone shut, and says, "no where were we?"

On the other line in a different location, John Colby is yelling into the phone at Tony. He's telling Tony they have Savoy cornered in a warehouse as a helicopter and swat team surround the building and are ready to move in.

Retrieved from "https://imagecomics.fandom.com/wiki/Chew_Vol_1_12?oldid=45190"
Community content is available under CC-BY-SA unless otherwise noted.