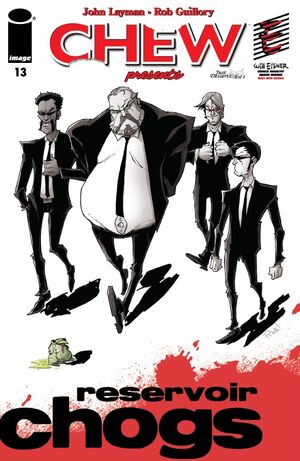 Several years ago, Agents Caesar Valenzano and Mason Savoy are trapped by henchman in a Montero shipping distribution joint. Savoy continues to leverage is expansive lexicon to Caesar's chagrin, and they make their move attacking their surrounding captors, and freeing themselves. Mason licks the blood from his knife, and learns that, "Montero knew" about the Avian Flu Epidemic before it even happened. Mason decides to send Caesar in undercover to spy on Montero and find out what he knows.

In the present, Montero Industries releases a new product called PoultPlus. At the Mercury Sun, Tony Chu and John Colby argue over how good PoultPlus could be. They enter Amelia Mintz's office and the man that always gives John a bad look is still there. Amelia gives them a can of PoulPlus and tells them its the real deal. Tony tries it and tells them it isn't chicken, "it's fricken".

At Montero Industries, frog and chicken hybrids can be seen that cluck and ribbit. Montero tells Caesar he prefers the term, "Chogs" but a marketing group said that wouldn't work. Caesar informs Montero that Amelia has already called 3 times looking for a quote on the frog DNA splicing and Montero is shocked. He orders Caesar to head down and kill her and reminds him that hired goons are easy to replace.

Suddenly, a smoke bomb is thrown in the room and a raid team bursts in by rope through the windows. Caesar throws knives out with the accuracy to maim everyone but not kill them. When Tony and John bust in the room and announce they are FDA, Caesar grimaces and grabs Montero to run. As Montero is distracted, Caesar knocks him out with the butt of his gun. John and Tony are shocked and Caesar tells them he's deep undercover FDA who used to work with Mason Savoy. He tells them about the phone calls using funny sign-ins and John believes him.[1]

Later back at U.S. Food and Drug Administration Headquarters, Mike Applebee confirms he works for them. He's mad at Tony for blowing Caesar's cover, but quickly forgives John when he tries to accept blame. Applebee says he needs to sign off on all of Tony's moves from here on out. Tony immediately requests his signature to investigate a northern vacation home of Montero's. He wants to send a surveillance team to see if they can catch any tertiary targets. Applebee agrees but tells Tony he needs to monitor them at night AND still perform his day job. As Applebee walks away, John asks why Tony looks down. He tells him he has a date with Amelia setup and John agrees to take the first shift to let him have his one-month anniversary with her. John smiles as he expects the job to be easy and he'd just loaf around

On Friday, John is panicking trying got get a hold of Tony as they have Mason cornered at the estate.

Retrieved from "https://imagecomics.fandom.com/wiki/Chew_Vol_1_13?oldid=55041"
Community content is available under CC-BY-SA unless otherwise noted.