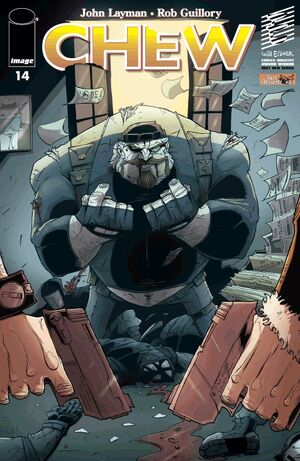 Many years ago, Tony Chu was sitting across a table from a girl sobbing uncontrollable. After several minutes, Tony eventually asks the woman,

Min "Mindy" Tso, if she will say yes as he holds up a wedding ring. Tony recalls he going crazy and becoming erratic as he thinks back to a time she was sobbing and shaving her hair off. He recalls her telling him she wants to be a part of him and hanging him a gift in a box.

In the present, Tony is spacing out at Amelia Mintz's home. She asks if he spaced out because of the message which involved an ex-boyfriend of hers ranting on the answering machine about Tony being a twerp. They agree there are some things left in the past as Tony recalls Min getting on his car and smashing it with a frying pan. They both tell each other they like them and give each other gushy eyes. Tony say she needs to check up on his messages since John Colby agreed to take his watch duty.[1] When he hears about John cornering Mason Savoy, he takes off.

As Tony arrives at the estate, Mike Applebee chews him out for letting sweet, beautiful John go in instead of him. He tells Tony he needs to head in and make things right.

Inside, Mason stands over an unconscious John telling him he better reconsider next time. When Mason hears a noise he splits. Tony enters the room too late to find John on the ground and Mason no where to be found. He licks John's blood to find out what happened.

He has Cibopathic visions of Mason offering John a chance to join him. To find out the truth about why the government banned chicken. He tells John he put in the request to save his life by admitting him to the cybernetic enhancement program, and he also asked for Tony to join the FDA. When John refuses because Mason bit off his partner's ear, Mason makes a move and knocks John out.[2]

Later at a movie theater, Caesar Valenzano buys a ticket to a zombie movie marathon and sits down. Next to him, is an undercover Mason. Caesar explains Tony was smart and set the surveillance trap that caught him. They both agree he won't stop unless they do something to stop him.

The next morning, Amelia wakes up early and walks around the house. She can't find anything except beets for food. When she opens the freezer, she finds something that causes her to run out of the house. Tony wakes up later to find her gone. He find a toe in a freezer bag on the floor that Amelia found in the freezer that Min gave to him earlier.

Retrieved from "https://imagecomics.fandom.com/wiki/Chew_Vol_1_14?oldid=45174"
Community content is available under CC-BY-SA unless otherwise noted.