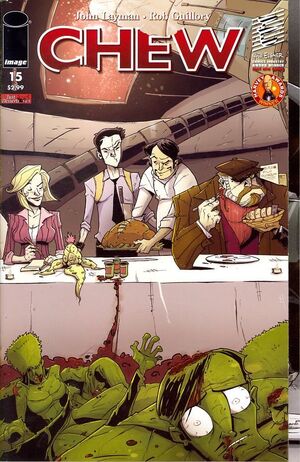 On Thanksgiving, Mason Savoy sits down to enjoy a lobster, wine, bread and more meal. With each bite, his Cibopathic skills inform him of the history of each bite. He sees the grapes being picked from the wine, and the lobster swimming in the ocean. When he gets to his final item, Tony Chu's ear,[1] he takes a bite and sees Tony's past. He sees their meeting, John Colby's injury[2] but every line of memory leads back to a teenage girl.

In Philadelphia, Tony walks up to his relatives' house. The burst out the door screaming, "Happy Thanksgiving!" but quickly turn cold when they realize it's just Tony. When Toni Chu hears that Tony has arrived, she tackles him and bugs him about his fake ear. She smacks him for not calling her back and continues to joke and be excited for Tony's arrival. She pushes everyone to be closer as a family as they enter the room with the rest of the Chu clan.

A knock at the door reveals a package has arrived for Tony. When he receives it the delivery man tells him he's been served. Tony is shocked Chow is suing him for breaking his jaw on Yamapalu.[3] Toni laughs and tells Tony that Chow is in the kitchen if he wants to talk to him. He is cooking a Turkey which infuriates Tony as he's FDA.

John Colby and Amelia Mintz arrive at the party unannounced. Toni tells John about how she's been reassigned by her employer, NASA, to work at Gardner-Kvashennaya.

Tony and Amelia make amends and promise each other to not keep secrets.

John escorts Amelia in and Tony looks scared. John asks what's to worry about, he thinks Tony is so boring there's nothing else he could be hiding. John turns around and is haunted when he sees Olive Chu. He tells Tony, hopefully she'll stay out of the way. Tony tells her 'hi' but she just turns around and walks back upstairs to her room.

Tony is about to say grace, since Chow the eldest can't with a broken jaw, and a loud screach can be heard from outside. When they go outside the house to investigate, a man is terrified and looks at the sky asking, 'What does it mean?'

Tony looks up and see alien letters that look familiar to the ones seen on Altilis-738. As they all awkwardly stare up at the sky, Olive walks out. While everyone stares at the letters, Tony introduces Amelia to his daughter, Olive.

Retrieved from "https://imagecomics.fandom.com/wiki/Chew_Vol_1_15?oldid=54171"
Community content is available under CC-BY-SA unless otherwise noted.