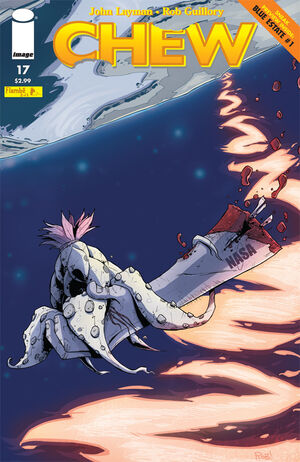 Since the appearance of the alien, fire-writing, NASA has dedicated all the time of the employees aboard the station to study the writing. The writing circles the earth and suddenly bursts through the hull of the station.

As the writing circles over Francis Bacon High School, a sudden food fight breaks out in the cafeteria. As the children playfully begin throwing food at each other, it slowly becomes more violent until and people are smashed with chairs and have butcher knives thrown at each other.

The next day, Tony Chu and John Colby arrive to investigate. Tony takes a bite of the food and sees a history of a Peter Pilaf being teased at the school. John asks how much time until their deadline and Tony tells him 45 minutes.

Tony and John ask Principal Serrano to pull up the transcripts and disciplinary papers on Pilaf. John also asks for Olive Chu which surprises Tony. Olive tells them about how he allegedly used food to control some girls in his Home Ec. class earlier.

Principal Serrano returns and informs them that Pilaf was a model student. He as involved in the chess club, astronomy class, and student leadership council. Serrano postulates that something changed in Peter when the alien writing appeared in the sky.

Tony tells John they have 25 more minutes. John says he doesn't care about the deadline and wants to move in. Tony explains the negotiation team must at least receive the requisite time to complete their jobs. John says that since the government has been canceling FDA budget and throwing it at NASA, this is a good opportunity to save some children and get it back.

As they enter the room claiming to only want to talk to Peter, Peter tells them to freeze or he adds another ingredient to his recipe which will kill everyone in the room. Tony and John spot several hostages huddled in the corner. John calls his bluff but when he explains he is going to upload the recipe to the world, Tony and John freeze as that could cause countless murders.

While it looks like John is frozen, he uses his cybernetic enhancements to hack Peter's phone rendering it useless. When Peter realizes the jig is up, Tony jumps on the distracted kid to knock him out and save the hostages.

As they wrap up the case, Tony realizes that Peter was in the astronomy club and sent letters and recipes to the space station. They charge him with killing the astronauts as well and Peter gives a genuine look that he did not commit that crime.

In Siberia, men bring Gallsaberry shipments off a freighter boat they retrieved from space. The Vampire welcomes the man back and says they have to catch up.

Retrieved from "https://imagecomics.fandom.com/wiki/Chew_Vol_1_17?oldid=45177"
Community content is available under CC-BY-SA unless otherwise noted.