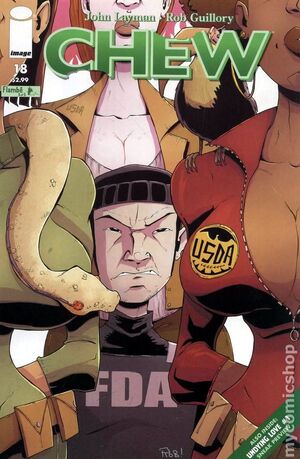 18 months ago, Caesar Valenzano and Mason Savoy were standing over a decaying body in a morgue. Mason hesitated about biting a decomposing body. Migdalo Daniel entered the room and informed them he had all the details figured out. He explained that General JonTongJoo, head of the bioweapons division in North Korea, was trying to develop a synthetic version of the avian flu as a weapon. Migdalo recomended they don't do anything as there's no conclusive proof that JonTongJoo would ever figure out how to stabilize the compound.

In recent events, Tony Chu and John Colby recall leap out of the way of girl scouts shooting at them, being surrounded by a cannibal soup kitchen crew, getting caught in a Jersey mob crossfire, and being chased by crazy mounties who dosed maple syrup. The whole time Mike Applebee snickered as he sent them on these assignments.

At the present, John verbally lets Applebee have it for sending them on all these deadly missions. Applebee continues to smile as he sends them on their next mission with a cheery disposition.

At the USDA, the USDA gets a briefing on the mission to head to North Korea to take out JonTongJoo and his bio-weapon he's manufactured. The head of the USDA explains it's a suicide mission but she expects that her people are trained and should come back alive. One of the USDA members asks why Tony and John are there and it's explained the FDA required two agents go with them, with a device that will end the conflict if needed. Tony worried it is a nuke and when he asks what the weapon is they all laugh at him.

Later on a plan, they drop out of the sky over a North Korean complex. Bullets fire and agents die left and right. One eventually tells Tony to 'hit the button'. John and Tony embrace and say their goodbyes assuming it's a nuke. When they open their eyes, they see Poyo standing there. Poyo kills almost everyone. When he gets to JonTongJoo, he is shot with many bullets and collapses. JonTongJoo gloats thinking he's won as behind him, Poyo wobbles to his feet. Poyo jumps up and rips out his heart. Tony fist bumps the sky that Poyo saved him and John.

Retrieved from "https://imagecomics.fandom.com/wiki/Chew_Vol_1_18?oldid=45179"
Community content is available under CC-BY-SA unless otherwise noted.