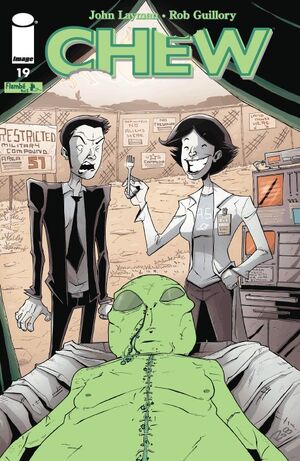 Tony Chu wakes up in a cheery disposition. He makes his beet soup and kisses Amelia Mintz goodbye as he heads to work at U.S. Food and Drug Administration Headquarters. He over hears Mike Applebee sing the praises of how good he is to someone on the phone. John Colby explains it's because Applebee is trying to get rid of him. Applebee sighs as he only got rid of Tony for one day. He walks outside and tells Tony there's no need to introduce him to NASA employee Toni Chu, his new partner for the day.

Toni walks them to a spacecraft and explains all the money the FDA used to get has been diverted to them. As they take off, Tony calls Amelia at work. The man who always gives John looks when they enter Mercury Sun suddenly perks up when Amelia says Tony's name. He sneaks over closer and closer to eavesdrop on the conversation that Amelia is having with Tony on the phone.

Tony hangs up the phone and Toni says that they are adorable.

They arrive at Area 51, where Toni continues to leave Tony in the dark about the plan. They enter a room with purple mutant babies. They were a result of a NASA directive to send people into space with wine, smooth jazz, and viagra to continue the human race. The extreme solar radiation mutated the babies and now NASA takes care of them. Toni grabs a pile of steamy poo as they leave to enter the next room.

They enter the next room filled with scientists and Toni announces to everyone that Tony is about to eat this poo as research. Everyone freaks out, including Tony, as they all mass exile the room. Tony complains he's not going to eat it and Toni says she knows. She just wanted to gross them out so she can further conduct her research. Tony sees a dead body from the Fisher-Okroshka International Space Station and takes a bit. He asks Toni if she believes in vampires as he thinks that's what caused the crash.[1]

A man pops out from the shadows with a gun. Toni exclaims she's been looking for him and the is bewildered how she could possible know. While he's distracted. Tony punches him in the face and Toni grabs him from behind and takes a bite out of his shoulder. She explains he knows know having used her Cibopathic skills. She explains he was going to sell special bullets he was making to the E.G.G. Terrorists. Tony agrees to cover for Toni since no one knows she has these powers. As a result, Toni gets a promotion later.

Olive Chu walks home as Chow Chu and Tony are arguing as to whether Chow will be allowed to bring another illegal poultry dish into the house of the Shens'.[2] Amelia asks Toni if they always fight. Toni tells them that they always have, and always will.

Retrieved from "https://imagecomics.fandom.com/wiki/Chew_Vol_1_19?oldid=45181"
Community content is available under CC-BY-SA unless otherwise noted.