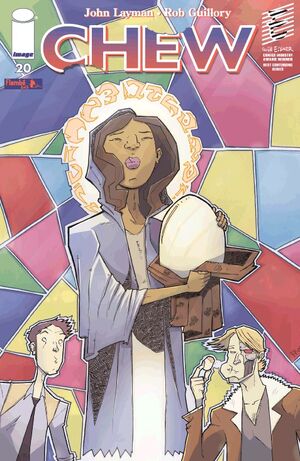 On Thursday, Caesar Valenzano comes home to find Mason Savoy passed out on the floor with green liquids coming out his nose. A dropper lays next to him with blood in it. Mason's Cibopathic vision shows him the galaxy, he forms a third eye and a comet comes towards the earth as the earth is surrounded by fire-writing.

As Mason comes to, Caesar helps him up. Mason explains he drank a single drop of Migdalo Daniel's blood. Mason believes there is a connection with those with food abilities and the appearance of the fire-writing, a cosmic purpose. Caesar is surprised and asks Mason if he knows what day it is, and Mason says it's Friday. Caesar realizes he's been out for a while and explains the fire-writing is gone for four days.

At the U.S. Food and Drug Administration Headquarters, Tony Chu and John Colby are being lectured by Mike Applebee about The Church of the Divinity of the Immaculate OVA. It houses egg worshipers who predicted to the day and to the minute when the sky-writing was going to appear. They are led by Sister Alani Adobo. Applebee instructs them that for once he's not sending them on a suicide mission,[1] instead he needs intel. They are to investigate and report back to HQ what is happening and if these nutjobs actually know anything.

At the Immaculate OVA, there are symbols and stained glass windows all around the church with the the fire-writing symbols upon them. Tony and John don monk outfits as they enter the church and are greeted by a reading from Adobo. She informs her followers, all in monk garments, that chicken is doom and they must not partake in consuming it. After the ceremony, she hands some fellow followers the Sacred Texts and instructs them to keep it safe. In the back of the room, John tells Tony he wants to get the book. Tony has a sneaking suspicion that this lady looks familiar. Adobo asks her followers if anyone has partaken in eating chicken since the fire-writing has appeared. Several members raise their hands and she gives them red kool-aid to absolve their sins.

During the ceremony, Tony and John duck in the back to follow the men with the Sacred Texts. They knock out the very large men protecting it and Tony realizes where he recognizes Adobo from.

Alani Adobo is the same person as Mrs. Sweets, the file clerk and deputy from Yamapalu when Raymond Kulolo stole Poyo.[2] She had split from the island aboard a boat when the island was set ablaze. She survived on nothing but Gallsaberry during the boatride to America and on the last day, she had a vision of the fire-writing.

John and Tony hear loud thumping noises. They head back to the main ceremony room where they find everyone who drank the kool-aid has dropped dead. They begin to freak out as they know Applebee will blame them for this and think they weren't just on surveillance. When they open the book, the book is not in English and shows the fire-writing script all through it.

Mason and Caesar discuss the need to expand their ranks. Mason heads to the suburbs and abducts Olive Chu.

Retrieved from "https://imagecomics.fandom.com/wiki/Chew_Vol_1_20?oldid=45183"
Community content is available under CC-BY-SA unless otherwise noted.