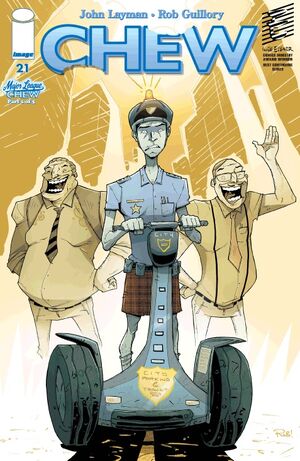 Mike Applebee dances through the streets in excitement. He can't wait to get to work and do something he has been longing for.

When Tony Chu arrives at work, he finds Special Agent Vorhees sitting at his desk. Tony looks at Caesar Valenzano who shrugs and has no idea why. Applebee arrives and informs him this is no longer Tony's desk and that Tony is now finally fired, or at least transferred. He informs Tony that he will have to work for the Municipal Traffic Division.

John Colby also gets a letter from Mike that he is being transferred as well.

The next morning, Tony stands in front of a mirror in disbelief in the outfit he has to wear, a kilt and emergency signal on his helmet. Amelia Mintz tries to tell him it will be OK and it doesn't look that bad but Tony can read that she's just trying to be supportive as she can barely hide her snickering

At the Municipal Traffic Headquarters, Tony is greeted with a very cordial new boss, Marshall Mellow.

Throughout the day, Tony completes menial tasks like rescuing kittens out of trees and writing parking tickets. He runs into Daniel Cornblum who remembers him from McBeefy's Burgers and Daniel proceed to tease him about the demotion. Tony receives a call from Rosemary Chu-Shen who sounds distraught that Olive has gone missing. Tony tells her he will take care of it and then notices that Daniel is taking off without Tony having cited him his ticket.

Suddenly, a vehicle flies by nearly flipping up Tony's kilt. He follows it to the bank and learns a robbery occurred and several innocents were shot. Tony licks some of the blood on the ground and the local police freak out at the idea. Tony then licks motor oil to understand where they went with his Cibopathic powers.

At the hideout where the robbers stand over piles of cash, they hear a sudden knocking at the door. The lone Tony stands outside the door and tells them there's a car illegally parked out front. When they open the door, Tony leaps in with his tazer gun knocking one of the men out. The rest of the robbers pull out their guns but suddenly a Swat car and rifled police officers bust through the windows and doors. The robbers lay down their weapons and surrender.

Tony heads back to Headquarters on his segway. Upon arriving, he receives a hero's welcome from his coworkers.

When Tony arrives home, he surprises himself to tell Amelia he actually enjoyed his job.

The next day Tony is getting the crap beaten out of him at his new job.

Retrieved from "https://imagecomics.fandom.com/wiki/Chew_Vol_1_21?oldid=25643"
Community content is available under CC-BY-SA unless otherwise noted.