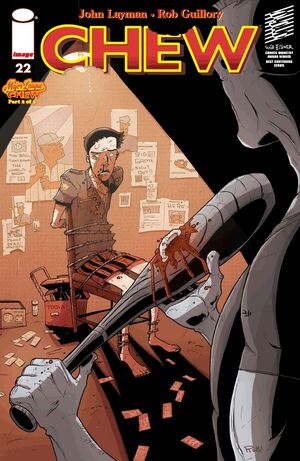 Caesar Valenzano walks into the room where Mason Savoy has Olive Chu tied up and is force feeding her food. He tells he her wants to teach her to use her powers but she keeps defiantly spitting the food back at him. Caesar tells him to take a break and try some coffee from Jumping Bean Cafe. As Mason uses is cipathic skills, he's shocked at some of the ingredients.

Caesar recalls earlier being sent on several suicide missions with Special Agent Vorhees. Now that Tony Chu and John Colby no longer worked for the U.S. Food and Drug Administration,[1] Mike Applebee didn't have anyone to send on the crap missions so he sent Caesar. The whole time Caesar was busy, Tony keept trying to reach him to ask him to run a favor with finding his daughter since Caesar still had FDA connections.

When Caesar returned to the office and checked his messages, Applebee walked by and discovered he had used his personal phone during work hours. Applebee grumbled and headed back to his office to grab a pile of more paperwork for Caesar to do as punishment for having talked to Tony Chu.

Caesar recalls how they pulled up to the Jumping Bean Cafe with Special Agent Vorhees to investigate. Everyone sat around the coffee shot wide-eyed with messages that state "crack" in their coffee. Caesar asked the barista if he knew about a string of crimes that have been committed recently. The connection between them all was they all had coffee cups from the cafe so the case was sent to the FDA. The barista made a latte for Vorhees and in the foam was written "Kill Your Partner". When Vorhees started reading off the ingredients, the barista freaked out and throws hot coffee at them. The patrons around the store stand up and started attacking the agents as the barista escapes.

Snapping back to the present, Caesar tells Mason he got out of there by punching a lot of people and with no help from Vorhees. When Caesar gets another call from Tony, Mason tells him to answer it and see what Tony knows. As Tony talks to Caesar, the sports writer from Mercury Sun pulls up and illegally parks in front of Tony. Tony becomes agitated and some men from Dan's crew blind side him knocking him out.

Caesar tells Mason that Tony hung up on him. Olive is frustrated and tells Mason to let her smell the coffee. After smelling, she tells Mason the barista is an effervinductor and can control people through messages in the foam. She tells Mason she can be trained, but it must be on her terms and she acts tough and independent to him demanding to be untied. Mason is pleased by her attitude and smiles.

Tony Chu wakes up to find himself strapped to a chair. Dan Franks tells him he's going to learn a lot about baseball as he points to a pile of corpse parts of dead baseball players.

Retrieved from "https://imagecomics.fandom.com/wiki/Chew_Vol_1_22?oldid=26198"
Community content is available under CC-BY-SA unless otherwise noted.