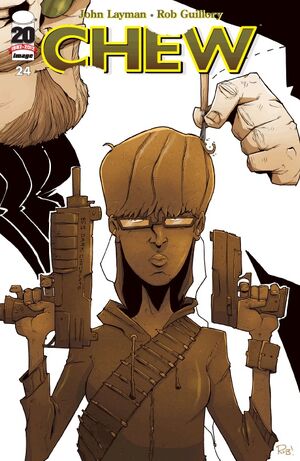 At a butter competition, near perfect sculptures are made of Mount Rushmore, the Taj Mahal, and butterzilla. When Hershel Brown, a Xocoscalpere who can carve anything perfectly out of chocolate, discovers his perfect carving of a feudal Japanese sculpture is disqualified for being made out of chocolate instead of butter, he looses it and murders everyone.

Rosemary Chu-Shen knocks on Olive Chu's door asking her to eat dinner. Olive coldly replies she's already eaten and heads back into her room. Rosemary stomps down stairs and complains to her husband.

Olive sneaks out the back door and is greeted by Mason Savoy and Caesar Valenzano. As they take her to her mission, Mason asks her to take a sip of a chocolate milkshake. As Olive tastes it, she spits it back in his face for having blood in it.

Three hours earlier, Mason stole blood from a man named Carroway in the hospital. Before Mason can explain, Caesar interrupts them and tells them to get ready. They spread out and use binoculars to spy on Hershel selling a chocolate laser to several servants of the Vampire. Caesar explains that Hershel is actually about to be kidnapped and they will follow them to the Vampire. When Hershel cuts off one of their arms and a fight begins, Mason and Caesar jump into action to save Hershel. As he's running away, a laser shot cuts him in half but Olive is able to dodge the shot.

Mason explains that as a Cibopath, Olive can learn from the victim if she wants. The blood he gave her earlier gave her faster reaction skills as Matt Carroway was a three-time black belt champion. He explains the Vampire is also consuming victims attempting to learn their skills and he wanted the Xocoscalpere skills.

Retrieved from "https://imagecomics.fandom.com/wiki/Chew_Vol_1_24?oldid=25760"
Community content is available under CC-BY-SA unless otherwise noted.