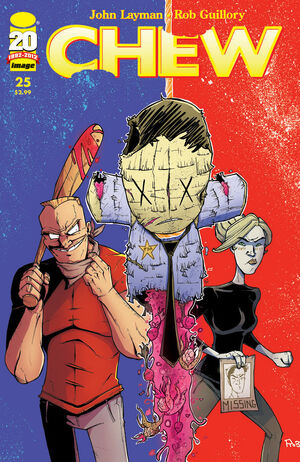 The elderly director Penya of the USDA is wearing an extremely revealing pink brazier and proposes more wine as she attempts to seduce John Colby. John says he needs to take a call as he's looking for an excuse to leave but she orders him this is more important as she drags him to bed.

Amelia Mintz is frustrated on the other line. She heads in to talk with Marshall Mellow about Tony Chu's whearabouts. Marshall informs her that Tony has done this before with the U.S. Food and Drug Administration and Mike Applebee warned him that he does this.

Determined to find him, she dials Toni Chu, Chow Chu, and Caesar Valenzano who all haven't seen Tony. Amelia is frustrated and Dan Franks asks her if she misses having a real man around. She tells him to shove it as he walks out the door with his stuff. She speaks with their editor, Herb Urlacher, who informs her that Dan quit this morning as he finally sold his book on sex lives of baseball greats. Amelia suddenly realizes Dan shouldn't have any idea that Tony was missing. She puts on her sunglasses and begins talking him through town.

At a movie theater that Dan heads into, Amelia is stopped by two large men that say she has to have a ticket.

Inside, Dan reveals to an audience of Nazis, Satanists, and fake civil war reenacters with fake muskets, that he wrote his book with the assistance of Tony Chu, a Cibopath. He will auction off his Cibopathic skills to the crowd.

Outside, Amelia talks to two members who are out on a smoke break. She writes up a recipe for something delicious and makes one of them bid on it in exchange for their ticket and costume. She changes clothes into an Elvis impersonator and enters the building.

When she holds up Dan who is just cut Tony loose as he's about to sell him to some scientists to perform research on dead physicists, Dan smiles and approaches her. He tells her she can't do much with a rubber gun as he flicks the ribber knife ending to the gun to her surprise.

He lurches towards he as she backs up to the wall and Tony tells Dan to stop. Dan turns around and asks what Tony plans on doing, and Tony winds up with a baseball in hand and pitches the ball into Dan's face, cracking his skull. Tony tells her he learned the skills from pro baseball players.

At the USDA HQ, Penya calls Colby into her office. She informs him she's been thinking about his request for a new partner.[1] She introduces Colby to her best animal partner she has, Poyo as John's mouth gapes wide open in shock.

Retrieved from "https://imagecomics.fandom.com/wiki/Chew_Vol_1_25?oldid=52272"
Community content is available under CC-BY-SA unless otherwise noted.