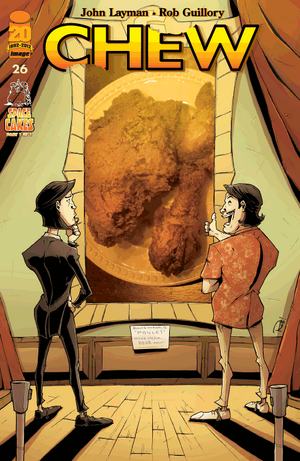 Three weeks ago, Chow Chu attended an auction to bid on a Quindim Buongio-Vannis painting. The esteemed chef, Barnabas Cremini, flexes his wealth and outbid Chow for the painting. Chow was enraged at Barnabas for the action.

At the present, Toni Chu is pretending to be asleep as her NASA boss, Paneer, lies wide-awake next to her. Paneer wakes her up and tells her he wants to talk as he thinks he's falling in love with her. Toni acts awkward and suddenly takes a bit out of his shoulder. Paneer freaks out and Toni tells him she doesn't think things are going to work out as he simultaneously walks out on her.

At Our Lady of the Broken Femur Hospital, Toni walks in to see how Tony is doing. When no one is watching, she once again users her Cibovoyant powers to bite Tony. Chow walks in and tells Toni he needs her. He asks if Tony will be ok and she smiles and says yes.

Chow tells her as they sneak up on Barnabas home, that he has been collecting Quindim Buongio-Vannis paintings and is planning on creating fakes and setting them on fire for insurance. When they break in, Toni uses her guise of being NASA and have jurisdiction everywhere to come in. When she licks the paining, she's happily surprised to find it tastes delicious. Barnabas explains that Buongio-Vannis is a Sabopictor and can paint anything to taste delicious. They both look at Chow to see him with a creme brulee torch and his recipes as the real reason they broke in. Chow explains that Barnabas has stolen Chow's recipes and has gotten rich of them. The straw that broke the camals back was when he rubbed it in Chow's face by using his wealth to outbid him on the painting. Chow lights the recipes on fire.

As the leave the apartment below joking about the events, Barnabas looks down on them scorned.

Later, the Vampire breaks into Quindim's home and consumes him for his Sabopictor powers.

Retrieved from "https://imagecomics.fandom.com/wiki/Chew_Vol_1_26?oldid=28120"
Community content is available under CC-BY-SA unless otherwise noted.