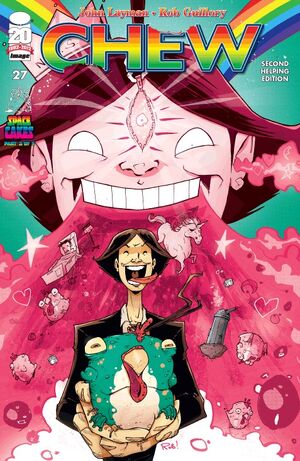 At the Our Lady of the Broken Femur Hospital, Toni Chu cheerily sits by Tony Chu who is barely conscoius. She tells him about her day as he barely mutters the word, "Ooolliiiivveeeee". Caesar Valenzano walks in to pay his respects but he keeps staring at Toni. He says they've met before but neither can place where they would have.

Twenty-two months earlier, Toni was stationed at the Farmington-Kapusta International Telescope in the Amazon Rainforest. Their story was similar to Gardner-Kvashennaya where they were overfunded. They began licking hallucinogenic frogs to pass time. Eventually, Mason Savoy and Caesar busted in on the place.

In the present, Toni and Caesar still can't place where they've seen each other but Mike Applebee interrupts and tells Caesar they need to go.

At the NASA headquarters, Toni walks non-chalet past Paneer who yells at her for not focusing on her main work. She kisses him on the cheek and he's angry yet still has a soft-spot for her.

Toni walks into her office and is surprised to see Jacob Butterfield, who was the one who gave them hallucinogenic frogs in the amazon. He tells her he's worried about fricken, or chogs. He tells her how they were made by Ray Jack Montero. He gathered up whichever chogs he could before they were all killed. He explains when he left to go to a conference, he left the cages open the chogs breeded quickly. When he had put an ad on the newspaper to get rid of some, D-Bear showed up and stole the chogs from him.

That evening, Toni talks Paneer into staking out the Speedy Upholstery to catch D-bear. Once inside, Toni takes a bite out of D-Bears shoulder to use her Cibovoyant powers to see into his future. She lets him go as D-Bear is shortly hit by a bus outside the restaurant.

Toni talks to the doctor at the hospital who tells her D-Bear will survive. She recommends putting him in the room with her brother but the doctor says Tony already has a guest. A man lurks over Tony from the shadows.

Retrieved from "https://imagecomics.fandom.com/wiki/Chew_Vol_1_27?oldid=28123"
Community content is available under CC-BY-SA unless otherwise noted.