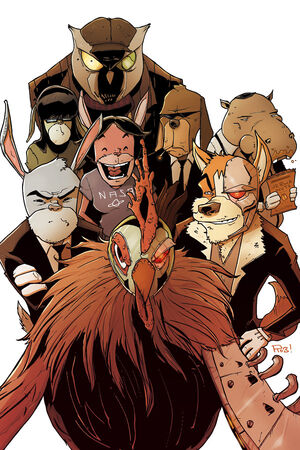 In Milan, a fashion show featuring cloths made out of food is interrupted by exploding beef, killing the model in the outfit.

At the hospital, John Colby holds Poyo as he stands over Tony Chu's bed. Suddenly, Toni Chu bursts into the room and is excited to see John. She instantly detects he's up to something. Toni pets Poyo on the head and John with a terrified look on his face warns her not to touch Poyo. He warns he Poyo is his new partner and the best partner he's ever had. Tony whimpers out an obscenity at John for the statement.

Caesar Valenzano and Special Agent Vorhees enter the room where Caesar again tells Toni he thinks he knows her.[1] John is suspicious as to why Caesar is really there.

Toni recalls a NASA party 10 months earlier. Caesar was there with Montero. Caesar drank too much and ends up running into Toni for the first time. Toni offers him a chance to hook up in the closet.

In the present, remembering the hookup, Toni acts awkward and pets Poyo again. John warns her not to do that.

The next thing she knows, her finger was bit off as she's talking to doctors about reattaching it. John apologizes as they walk out of the hospital with Tony. They both admit they plan to use Tony to solve their cases. John gives Tony too many drugs to help him feel better and Tony starts hallucinating.

They are both searching for Angus Hinterwald, one of the world's foremost geneticists. He was hired by McBeefy's Burgers to research a strain of beef that would not decay or deteriorate. However, he soon discovered a strain of DNA that would cause the beef to explode. Thinking he could make some money on the side, he began shopping this weapon around. Soon, E.G.G. Terrorists kidnapped Hinterwald and demanded he give them his secret for free.

Caesar gives Tony a blood milkshake where he got the blood from a E.G.G. member who was locked up. Tony brings them to their warehouse. When Caesar proposes an elaborate plan to sneak in, John told him, "Poyo don't sneak."

Upon being held up upon John's obvious entry, he's told to put Poyo down. When John does, Poyo kills all the E.G.G. terrorists freeing Hinterwald. Surprisingly, Hinterwald tries to escape. He warns John about an unstable molecule that could cause all beef to, but he's cut short of finishing his sentence by John. Caesar warns him it sounded like he was going to say something important but John shrugs it off and says that's for the guys at the station to investigate as he walks off of the scene with Hinterwald strewn over his shoulder.

Elsewhere, cows graze in a field. One begins glowing like the beef that exploded in Milan and suddenly combusts like a small bomb.

Retrieved from "https://imagecomics.fandom.com/wiki/Chew_Vol_1_28?oldid=52273"
Community content is available under CC-BY-SA unless otherwise noted.