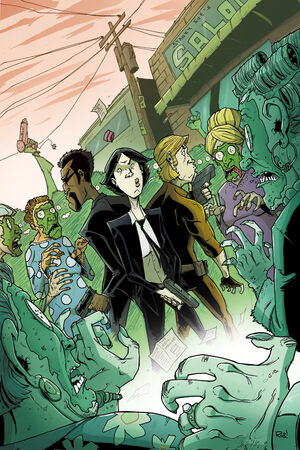 At the Our Lady of the Broken Femur Hospital, Tony Chu walks around with crutches. He wonders where everyone is as he's alone for the first time.

Across town, Caesar Valenzano, Toni Chu, and John Colby stake out a beauty shop together. They watch women walk in hideous but walk out absolutely gorgeous. Caesar is shocked and John asks if he paid attention during debrief.

Six hour earlier, Mike Applebee, Paneer, and Director Penya debriefed them on a mission that required all three of the agencies to work together. They informed them they would be chasing a Victuspeciosian who can transform appearances for a period of hours with a special compound she created.

During the debriefing, Caesar continued guessing where he knew Toni from.[1] He guesses several parties, including how they hooked up at a Houston NASA party. He eventually recalls Georgetown where Toni came onto him while he was in a mouse outfit and they hooked up again.

Toni insecurely flips out and tells him to stop guessing and that they shouldn't know each other. Upon the outburst, Applebee gets in their faces and tells them to pay attention. When Applebee talks about the missing Great Fatanyeros and Quindim Buongio-Vannis, Caesar asks about why they're missing. John tries to whisper about the vampire, but when Applebee sees them talking he kicks them out and tells them to solve the case.

The alleged suspect is Judy Heinz-Campbell. She is being hunted by the Vampire for her skills and is also a person of interest in crimes where people changed their face to rob a bank. When Caesar hears about the vampire, he tells Colby he's not a real vampire, he just uses his Cibopath to steal other's powers. He slips and tells him that he has been chasing him with Mason but quickly coughs and says, "used" to chase him with Mason. John gives him a sideways glance knowing he's up to something from earlier.[2]

Suddenly, the Vampire walks out with Judy held at gunpoint. After a brief shootout, the Vampire drops Judy and takes off with John and Caesar giving chase. Toni walks up sweetly to Judy and takes a bite out of her shoulder. Toni pulls out her gun and tells Judy she's under arrest for the murder of Judy Heniz-Campbell. Toni tells her that she knows that the Vampire was a fake, and so is she. Judy was murdered several weeks ago and this man was using the compound to hid his real identity as he wanted to make as much money as possible on the compound before taking off.

On a rooftop above, unseen a servant of the Vampire watches the events unfolding.

That evening, Toni shacks up with Paneer again. When he proposes, she tells him she has to bite his shoulder. He agrees and she looks excited and says "yes" to his proposal. As they embrace, she has a look of sadness on her face.

Retrieved from "https://imagecomics.fandom.com/wiki/Chew_Vol_1_29?oldid=52274"
Community content is available under CC-BY-SA unless otherwise noted.