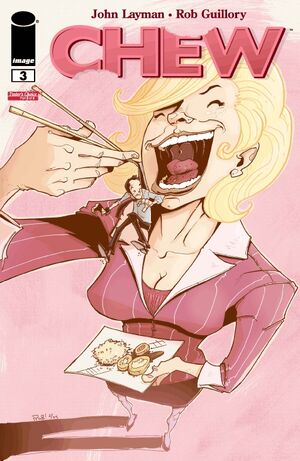 Tony Chu sits in the hospital telling his story how he found the love of his life to his friend bandaged all around his face.

Tony Chu recalls earlier people all over Philadelphia getting sick from reading the newspaper. People are throwing up in disgust in trash cans, on buses, on themselves. Amelia Mintz walks into the Mercury Sun with her head held high as she walks through the chaos of people becoming sick. Amelia Mintz is explained to be a Saboscrivner, a person who can describe food so perfectly that someone reading the review actually feels like they are eating the food. Becoming bored with her skills, she begins writing about poor restaurants with "D" ratings much to her editor's, Herb Urlacher, chagrin.

At the U.S. Food and Drug Administration, Mike Applebee busts into Tony's office. He asks for an update on Evan Pepper[1]. When Tony has excuses of not finding any bodies in morgue's, Applebee storms off saying to not disturb him until real police work is done. Mason Savoy walks in and Tony tells him Evan was a meticulous paper filer. He says he's trying to find a connection between the Yakuza attack at Sushi Ono's and the missing file from the FDA files. He asks if anyone in the FDA would want it covered up. A puking sound is heard and Applebee bursts back into the room demanding the ludicrous idea of arresting or firing Ameila since he threw up on his shirt upon reading her review. When Mason shows him a picture of Amelia from her reviews, Tony is smitten once again realizing this is the girl he's spotted several times.

Back at the hospital in the present, Tony explains to his injured friend that he was in love with being able to read reviews of foods so delicious and not having his Cibopathic skills remind him about the foods history.

Tony recalls visiting Mercury Sun to see Amelia. There is a long line of angry patrons wanting to talk to her. One man shows a box to the security guard that glows gold when he opens it, thinking it's a fruit, wanting to show it to Amelia. A group of three Frenchman dressed gangsters bust in with guns holding up the place, searching for Herb Urlacher.

Tony fantasizes about being smooth with Amelia but he snaps out of his daydream and he's just mumbling with Amelia awkwardly starting at him. When the Gang tells Amelia to write about the FDA making up the Bird Flu and how it's all a big hoax, she begins reading her review outloud. The men become sick and while they are distracted Mason and Tony arrest the men. When the dust settles, Tony notices Amelia is gone and Applebee is mad.

Amelia is on the plane with the man with the box and the glowing fruit.

Back in the present, the man in bandages asks who Tony is revealing it's not his friend at all. Tony looks at the man's papers and apologizes and leaves for the next room to see John Colby. When John asks him if anything is new, rather than tell the story again, Tony just replies, "nope, nothing new at all...".

Retrieved from "https://imagecomics.fandom.com/wiki/Chew_Vol_1_3?oldid=68142"
Community content is available under CC-BY-SA unless otherwise noted.