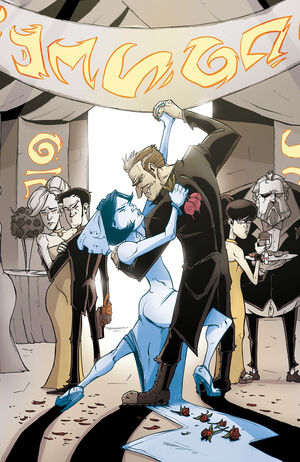 Toni Chu is preparing for her wedding to Paneer when Rosemary Chu-Shen knocks on her door telling her there's a situation outside.

Walking into the main room, Special Agent Vorhees is seen dancing naked, D-Bear is a wedding crasher hitting on Olive Chu, Sage Chu and Harold Chu are licking hallucinogenic Chogs, and Tony Chu argues with Chow Chu over the illegal chicken he's prepared for the wedding.

John Colby smiles as his dates, Mike Applebee and Director Penya, fight over him. Tony smiles, as she knows how perfect everything is as she excepts her fate that she's seen.

She snaps out of her vision of her future wedding which didn't happen. She is trying on a dress with Paneer and makes him promise to take care of her brother after she's gone. When she heads into the dressing room, Paneer waits and waits. He finds out that she has left.

Toni is next seen tied up and missing her arm and both legs as the Vampire stands over her with a bloody apron and knife. He demands to know why he can't absorb her powers. She tells him she won't tell him why as she recalls eating nothing but beets. He snaps her neck in frustration, and Toni dies.

Later, at the hospital everyone mourns the loss of Toni. Caesar suddenly remembers meeting Toni for the first time. She and her brother had just gotten ice cream, and Chow was picking on Tony. Toni walked over to Caesar and told him about her power. She bit him to tell him he's save the world one day and that he'd grow up to be a secret agent.

Retrieved from "https://imagecomics.fandom.com/wiki/Chew_Vol_1_30?oldid=52275"
Community content is available under CC-BY-SA unless otherwise noted.