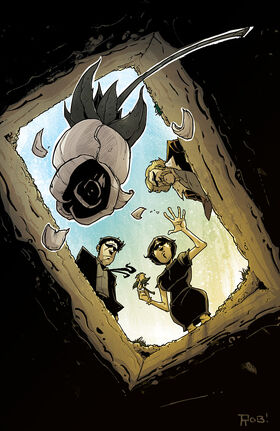 The Chu family morns the loss of Toni Chu. They all tell Tony Chu to catch and kill the guy responsible for her death.[1]

Tony has a flashback thinking about how he also buried Min "Mindy" Tso-Chu. John Colby had just became his partner and apologizes to Tony as brain cancer is a rough way to lose a wife. Toni tells Rosemary Chu-Shen that she should watch over Olive Chu for a little bit while Tony recovers. While Rosemary protests at first, Toni says she can see the future, there's nothing to worry about as it will be temporary.

In the present, Mike Applebee walks up as Tony awkwardly attempts to talk to Olive. Applebee reinstates John and Tony back into the U.S. Food and Drug Administration.

Tony and John head to Heavyweights. An entire gym spontaneously combusted. Tony begins taking bites of the corpses. They also receives reports all across town of people exploding in flames. As Tony continues sampling it, he finally realizes the lead of the new energy diet drink, Thinergy Super Soda.

Tony has a vision of J Howard Broccolo, who is the CEO of Thin-Ex Industries. He was researching Thinergy Super Soda as the ultimate energy and diet drink. It was rejected by the U.S. Food and Drug Administration due to it causing spontaneous combustion in its drinkers.

At Thin-Ex, Tony Chu and John Colby busted in to stop the greedy CEO's money plan. However, they discovered he was a follower of The Divinity of the Immaculate OVA and had a Sacred Texts in his drawer. Tony speculated he was doing this for murder and money was just a positive side-effect for him.

Retrieved from "https://imagecomics.fandom.com/wiki/Chew_Vol_1_31?oldid=68145"
Community content is available under CC-BY-SA unless otherwise noted.