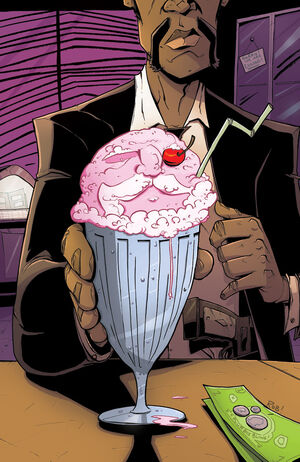 At Mundo Polliza, people are becoming sick and puking all over again. Since the government became lax with chicken policies after the fire-writing in the sky appeared,[2] many illegal chicken joints popped up again and Thinergy Super Soda is causing people to get sick when they eat the chicken. The Divinity of the Immaculate OVA is held up in Mundo Polliza and are sniping USDA agents that come near the restaurant.

John arrives on the seen and gets a lowdown from the USDA agent in charge. John pushes her out of the way as ninja sharp shurikens land on a nearby vehicle. Tony Chu takes a bite and realizes it's a tortilla. A member of the church must be a Tortaespadero, or one who can fold tortillas into sharp objects. Tony asks for a grenade, and uses his MLB pitching skills he learned to throw it through a window.[3] Tony calls out where the henchman are having tasted a tortilla that was inside.

After infiltrating, the USDA agent can't believe he was able to subdue the men without harming a civilian. Tony continues to press cases as he's determined to catch the Vampire for killing his sister.[4]

Caesar Valenzano steps away to secretly make a call to Mason Savoy. He tells him he's going to want to taste a sample on this meat wagon along with Olive Chu so they can learn these skills with their Cibopathy.

John interrupts Caesar, who awkwardly covers, and John has him join him for dinner.

Soon at the Speedy Upholstery, John orders a chicken dinner and tells Caesar he believes it's all BS why chicken was banned. When Caesar orders a strawberry milkshake, John recalls back to the milkshake Caesar gave Tony[5] and all the calls and slip-ups he's made talking about Mason.[6] Putting it together that he's working with Mason, John leaps across the table attack Caesar. After a brief scuffle where they fight each other to a standstill, Caesar says he can arrange a meeting with Mason and John accepts.

At U.S. Food and Drug Administration Headquarters, Mike Applebee questions Tony's decisions to chase the Vampire. Tony, normally mild-mannered with Applebee, gets in his face and tells him to stand down. Applebee whimpers away having never seen Tony stand up like that before.

Tony smiles and looks at the telephone. He calls Olive and asks her to spend time with him at dinner sometime, Olive smiles and accepts. John and Caesar walk into the office with scratches and band-aids on. When Tony hands up the phone and asks them what happened, they say they don't want to talk about it.

Retrieved from "https://imagecomics.fandom.com/wiki/Chew_Vol_1_32?oldid=52276"
Community content is available under CC-BY-SA unless otherwise noted.