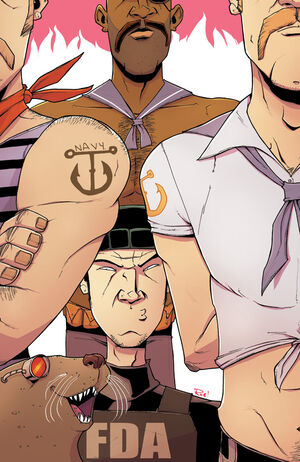 Mike Applebee sits on the couch balling his eyes out with John Colby sitting next to him. Applebee wines about how Tony was mean to him previously so he sent him on a case to work with the U.S. Navy.[1] John answers a knocking at the door to find Caesar Valenzano outside. Casesar whispers to him Mason Savoy is waiting outside for him. John is excited to have an excuse to leave and tells Applebee he has to go. Applebee flips from being sad to upset and orders him that he's off duty and has to stay. Caesar says he'll come back another time. After shutting the door, there's another knock. When John opens the door again he's punch in the face by Director Penya who calls him a two-timer and a liar.

Outside, Caesar tells Mason that Tony is out working with the Navy. Mason mutters Yamapalu.

The U.S. Navy agrees to bring in U.S. Food and Drug Administration agent Tony Chu to assist with their case. They inform him Oscar Chalaza, the second-in-command of the The Divinity of the Immaculate OVA has been spotted on the island. Tony looks at a picture of two men, one scrawny, one much larger and buff looking. The Navy reports that Oscar is overseeing the training and indoctrination of new recruits into the church on the island of Yamapalu. They want to send Tony in to subdue the man.

As they send Tony off, they give him a secret weapon crate. Tony believes he knows the drill and tells the crate's contents it will be ok. He presumes it will be Poyo again.

As the seals approach the island, Gallsaberry can be seen growing under the water.

Upon landing on the island, Tony navigates the Seals to Fort Yamapalu. Upon sneaking in, they find Oscar and the bodyguard. Tony knocks out the larger man sleeping and tells the scrawny Chalaza to get out of bed, they're taking him with them. The man laughs and reveals he's not Chalaza, he's the bodyguard Dominic Partridge as he takes a bit out of the sandwich. He punches the navy seal and Tony through the wooden wall with his incredible strength.

Tony panics and hits the secret weapon button. When the crate opens, it's a stack of baseballs. Tony is shocked as he though it was Poyo, improvising he takes a baseball and uses his MLB skills to throw it at Dominic temporarily stunning him.[2] Dominic is suddenly unable to pick up a big pole as he's on an empty stomach. Tony jumps in the air and knocks him out.

Tony samples his blood and realizes they were recruiting individuals from all over the world, including Russia, to join the church. Tony spots the church worshipper who also wears the mark of the Vampire. He leaps onto the man and snaps his neck. He takes a bite of his shoulder to find out where the Vampire is and jumps on a plane to get there.

Retrieved from "https://imagecomics.fandom.com/wiki/Chew_Vol_1_33?oldid=52277"
Community content is available under CC-BY-SA unless otherwise noted.