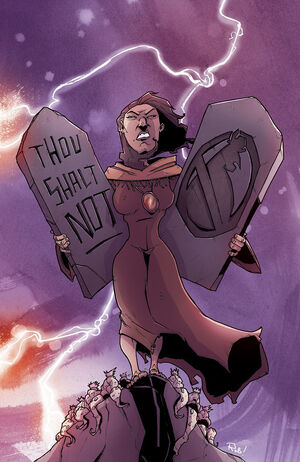 John Colby lies in bed looking terrified between Director Penya and Mike Applebee who both look at him with adoring eyes. Upon getting up, they both make him breakfast, prepare his clothes, and act kindly towards one another. John says he's shocked it turned out this way, but they reply there is more than enough "John" to go around between the two of them. As John spaces out he's brought back to reality when Penya opens the door and movers are bringing in her items to move in. John spits out his coffee.

At U.S. Food and Drug Administration Headquarters, Tony reviews the case files of a downed Judo plane and a sniper team murder. Both report some cannibalization and Tony suspects it is the Vampire preparing offensive skills.

Applebee yells at Chu from another room. As he enters, he gets close to yell at him about paperwork from Yamapalu.[1] Tony stares right back again Applebee again and once more Applebee stands down and tells him he will do the paperwork for him.[2]

John looks at him shocked and Tony tells him he's done work with and for people he doesn't want to. Especially after the Vampire tried to get Tony to work for him after killing his sister.[3]

John secretly takes a call from Mason Savoy who tells him it's time. John has apprehension about performing some tasks for Mason when he's interrupted by Tony Chu. Tony tells them they have a case at the Pumpkin House.

Upon arriving, they find the The Divinity of the Immaculate OVA is holding people hostage. They found Donald Barley who can grow vegetables very large. When he refused to sell his super seeds to the cult they kidnapped him.

At the back of the Pumpkin House, Tony takes a bite of the house to get a blueprint. Upon sneaking up on the main captors, Tony savagely subdues them with a large carrot stick. One of the man whimpers he has a message from Alani Adobo for him. Upon biting the man, a vision of Alani appears. She tells him she doesn't want to hurt or kill people. She wants to save them and tels him there is a grave danger coming to the planet earth. She tells Tony he currently aligns himself with the people who will destroy it and implores he seek out the truth, as he will then become a believer too.

Outside, John sneaks away to meet with Mason. Colby knocks him out and phones Tony to tell him the good news that they've finally caught him.

Tony bursts into the apartment home to tell Amelia about his good news of catching Mason, where Amelia Mintz and Olive Chu sit waiting. Amelia tells him he's missing his date with his daughter. Tony walks over to the refrigerator and grabs a cigar box. He tells Olive about her great grandfather Ong Chu had this skill of Cibopathy and that he knows she does too. He opens the cigar box to offer her the Toe her mother, Min "Mindy" Tso. He wants her to get to know her before her brain cancer took over. Olive looks shocked as she pulls out two toes, Tony grabs the bag in excitement and yells, "Antonelle"!

Retrieved from "https://imagecomics.fandom.com/wiki/Chew_Vol_1_35?oldid=52278"
Community content is available under CC-BY-SA unless otherwise noted.