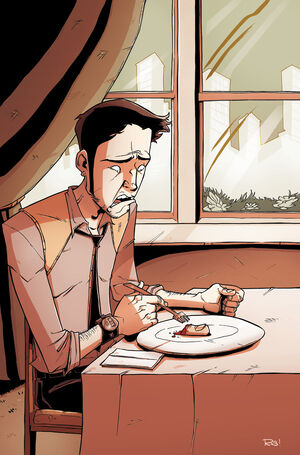 At an FDA Supermax Food Prison, John Colby enters to see Mason Savoy. He passes through strict security scanning where others are caught attempting to sneak food into the facility.

At his apartment, Tony Chu recalls going to prom with Min "Mindy" Tso and getting caught by her data making out in his car. While General Tso began physically hurting Tony, Min jumped in the way and told her dad she loved him.

As Tony snaps out of his vision, Olive Chu hands him her plate and tells him that he must have gotten Mom's toe as she has Toni Chu's. Upon switching plates, Toni begins warning him and giving him instructions on what to do. She was able to do this with her Cibovoyant visions. Chow Chu suddenly arrives and tells them he's in trouble and needs their help.

In Kansas, John picks up the phone to talk with Mason. He tells him everything is going as planned and calls him partner. They smiles as they had planned for Mason to get captured by Mason tells him not to rough him up so much next time.[1]

Retrieved from "https://imagecomics.fandom.com/wiki/Chew_Vol_1_37?oldid=31541"
Community content is available under CC-BY-SA unless otherwise noted.