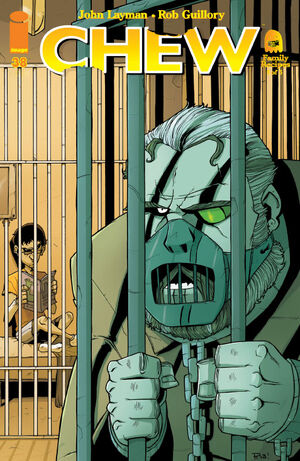 Olive Chu recalls a memory from eating her mom's of when Tony and Toni were eating her cooking and Tony hadn't revealed his powers to Min yet.

She snaps out of her vision when Amelia Mintz calls her as she sits in front of a desk where she's recently carved chocolate and tortilla ninja stars. Olive asks to speak with Tony but Amelia tells her he's too down in the dumps from eating too much of Toni's toe.

At the FDA Supermax Food Prison, Caesar Valenzano and John Colby stand outside a sewer pipe waiting for Mason Savoy. Caesar explains the plan is Mason would head inside to find someone.

Mason entered the prison to find he's not well liked upon eating the food. He has put many of the people in the prison there. Mason smiles as Raymond Kulolo explains he'll be there for a while. Mason informs him a plan is in action and he's welcome to tag along. As Caesar and John flip off the power outside, Mason knocks out security guards and heads to the basement below the basement where Ray Jack Montero is held.

They are attacked by Raymond's bodyguard, Rolo Horalsky, who is a Sucroformautare, one who is able to assume the characteristics of any sugary snack or dessert confectionery he consumes. Mason sees a weakness in Horalsky's teeth having consumed so much candy, and knocks him hard shattering his teeth and knocking him out. When Mason approaches Montero, Montero freaks out about having to tell him how he knew about the chicken flu before it even happened.

Outside, Mason emerges from the large drain pipe where Caesar and John have been waiting. Mason tells Caesar he got the information by biting Montero with his Cibopathy.

Inside the prison, Montero and Horalsky stumble to the feet. Montero rushes as fast as he can to the phone to call an emergency line. He tells the person on the other line that, "he knows" and is panicked about Mason.

Outside, Kulolo peaks out from the drain pipe and runs away in the opposite direction as Mason.

At the apartment, Tony sits depressed looking at Toni's toe on a plate. Amelia tells him to eat and Tony refuses. Amelia and Olive surprise Tony by offering him a plate of freshly cooked Gallsaberry.

Retrieved from "https://imagecomics.fandom.com/wiki/Chew_Vol_1_38?oldid=31602"
Community content is available under CC-BY-SA unless otherwise noted.