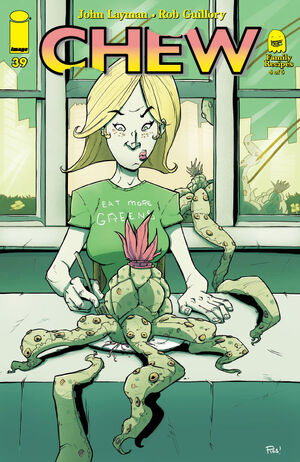 Amelia Mintz recalls walking in Toni Chu visiting Tony Chu when he was injured at the Our Lady of the Broken Femur Hospital. She recalls when Toni stumbled out quickly, due to her secretly cutting off her toe,[1] and leaving a NASA book behind.

In the present, Amelia shows Olive Chu the Gallsaberry plant she has been growing in her garden. She tells her that she snuck a seed from Yamapalu and has been growing it.[2] Olive takes a bit and sees a galactic vision. Amelia explains she's been eating it in small batches and writes a book about an international detective that looks remarkably like Tony.

However, Olive is surprised the book is not written in English. It appears to be written in the fire-writing that was in they sky as well as the Sacred Texts. Olive is than shown the NASA book Amelia took from the hospital. It's a recipe for Gallsaberry with some rare ingredients. Amelia asks for Olive's help in getting the rare ingredients.

Amelia and Olive arrive at Tony's house. He sits depressed and moody about Antonelle's toe still. As he's distracted by Amelia, Olive sneaks into his room and returns several minutes later where the girls both leave.

Later at the U.S. Food and Drug Administration Headquarters, Olive dons a suit and Tony' badge she stole from his apartment. They enter passing several agents on their way to the sixth floor, special research.

Upon arriving on the sixth floor, one of the workers gives her a hard time and tells her that she will need to wait while he checks her credentials.

A group of E.G.G. Terrorists reveals themselves from the shadows. They yell they want access to FDA mainframe computers to download the evidence they need to prove the avian flu is a cover-up and scam by the U.S. government. They claim they know the U.S. Government has the ability to cure it, as well as a unleash it again if needed.

Olive instinctively heads to the break area. She finds a candy machine and uses her Xocoscalpere skills to carve knives out of the candy bars.

She springs into action in the main room throwing knives through E.G.G. member's hands and disabling them.

Upon seeing her skills, the scientists believe she truly is an agent and let's her do what she wants. She is shown the room to the Hallucinogenic Chogs.

At home, Tony eats the Gallsaberry recipe made by Amelia and Olive and has a Cibopathic vision of Altilis-738 and Toni talking to him there.

Retrieved from "https://imagecomics.fandom.com/wiki/Chew_Vol_1_39?oldid=31668"
Community content is available under CC-BY-SA unless otherwise noted.