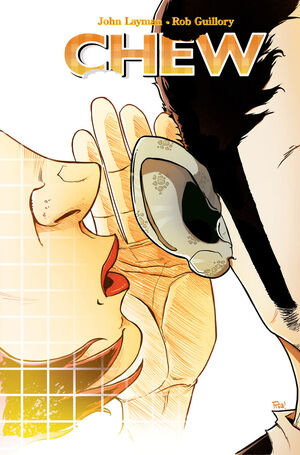 Tony Chu continues seeing a vision of Toni Chutalk to him on the futuristic planet of Altilis-738. She explains that Altilis-738 was the planet they were observing at the three major telescopes around the world (Farmington-Kapusta International Telescope, Gardner-Kvashennaya, and Granger-Coulibiac). Altilis-738 had a fire-script appear in the sky the same way that earth had that also mysteriously vanished. Toni explains Paneer found a classified script from Granger-Coulibiac that described a year later the script reappeared and the planet exploded.

In reality, Amelia Mintz and Olive Chu watch him trip on the hallucinogenic meal they prepared for him. John Colby knocks on the door and tells him he needs him for a case. He sees Tony stoned and asks if he's safe to work. Tony says he can though he sees everyone as a cartoon animal. John grabs a quick bite of the trippy soup and begins seeing the same thing.

On the way, John explains they are investigating Branston Armitage IV, a Pecklozofabier, who is able to create pickles that are both sour, and dangerous to the point of being deadly. They decide to head to Armitage Pickles to check it out.

As they continue to be stoned and see the world not as it is, they defend themselves again sheep attacking them in tanks, alien laser ships, and monster pillow people.

They snap back to reality as Mike Applebee yells at them. He tells them that Armitage Pickles is several blocks away, and as they were stoned they entered a Nap-Rite Pillowz pillow factory instead. Tony and John look around to see pillow feathers and each other wrestling with standard pillows.

Outside, Caesar Valenzano calls in to tell them they infiltrated Armitage and apprehended Branston.

Another FDA agent reports in that these aren't goose down pillow, they are chicken pillows, and that Chu and Colby just uncovered the biggest bust in FDA history with thousands of illegal chickens being held in the basement of the pillow factory. Tony phones for Amelia and Olive to pick him up as he needs some air.

At home, his stoned visions start to fade. He is in his last moment with Toni who whispers into his ear how to defeat the Vampire. Tony is appalled and claims he can't do 'that'. Toni assures him he can and he will. Toni says her goodbyes but tells Tony to give a bite of the toe to Olive.

Olive takes a bite and excitedly yells out, and then calms down says, "cool" in regards to whatever Toni said to her.

Retrieved from "https://imagecomics.fandom.com/wiki/Chew_Vol_1_40?oldid=52229"
Community content is available under CC-BY-SA unless otherwise noted.