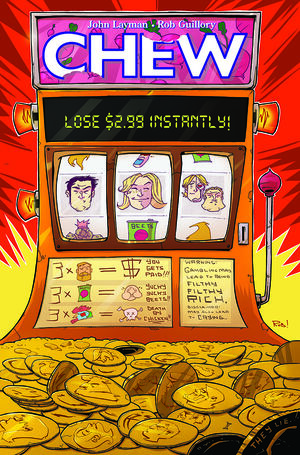 It smells like death in here. Death... and hot fudge.

In Las Vegas at the Coconut Cabana Hotel, a man knocks on a door asking for Tony Chu. Inside the room, Tony responds to come back latter. However, the man kicks in the door and tells him it's a matter of national security.

The day before, Tony, Amelia Mintz, and John Colby arrive at a U.S. Food and Drug Administration conference. Various members of the FDA murmur about Tony Chu. Finally one approaches him and congratulates him on the big chicken bust.[1] Michael Applebee stops by and gives Tony a hard time stating he just stumbled upon the bust and didn't do any detective work. When Director Lamode stops by, he pushes Applebee out of the way. He thanks Tony and tells him Applebee is useless, which irks Applebee. After the director leaves, the crew heads to the World of Vodka where Tony finds beet flavored vodka. Inside, Tony and Amelia talk about Toni 's message. Tony admits he's read for the world to end and he just needs to be happy in the meantime. At another table, Applebee complains to Colby about Tony.

Later, the drinking lead to Tony and Amelia getting married.

In the present, Tony calls Caesar Valenzano at U.S. Food and Drug Administration Headquarters. He asks if he has capacity to help to take the case. Caesar tells him he's swamped. Tony convinces Amelia to let him take the case by reminding her there may be a big story in it for her.

They arrive at the crime scene. Someone froze everyone in chocolate. They chip out several people and they scream about the OVA Church. Tony takes a bite of the chocolate. He tells them it was a setup and it was actually servants of the The Collector. He explains Anazani Lima created the chocolate gun for good but was killed and had his technology stolen.

Tony immediately leaves to where the hitmen were located and takes back the chocolate gun. He is cheered for being a hero once more.

Later, Amelia and Tony heads to John's room and break in. They find him in the honeymoon suite bed with Michael Applebee.

Retrieved from "https://imagecomics.fandom.com/wiki/Chew_Vol_1_41?oldid=52221"
Community content is available under CC-BY-SA unless otherwise noted.