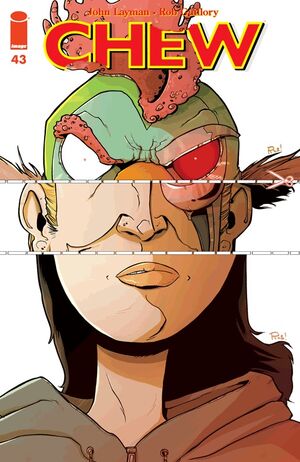 You mean take down the sick fucker who killed my aunt Toni? Oh yeah, I'm ready.

Appearing in "Chicken Tenders, Part 3 of 5"

Olive Chu recalls using her Cibopathy to receive good grades in school and perform better in sports. Rosemary Chu-Shen greatly approves as she feels she can finally be proud of her daughter again. Rosemary is mad that boy Tony Chu and Tang Shen are oblivious to all that is going on. Rosemary checks on Olive, who is going to bed. She smiles seeing her suck her thumb and cuddle with a teddy bear. As soon as she shuts the door, Olive jumps out of bed and pulls out her Chocolate and Tortilla-based weaponry.

Outside of the Chu residence, John Colby asks Mason Savoy if Olive is ready for the big mission. Mason reminds him that she's a more powerful cibopath than him or his father. John tells Mason Tony will be mad if he finds out and that Mike Applebee made sure to keep Tony busy for now. He's bring Poyo along just in case things go south.

Meanwhile, Tony Chu arrives in Antarctica. He's told he will have three weeks to discover who killed a penguin. Tony flips out when he learns Mike has once again budgeted three weeks for him to be there. He pulls out his badge and immediately demands to bite them to find out who the killer is.

Back in Philadelphia, John, Olive, and Mason head to the Red Bear Bakery. They meet a man named Boris who is considered a contact for the Collector. Olive looks around the bakery and sees several Russian spies hidden in cakes. Outside, the next thing Mason knows is several bodies are flung through the window. Mason runs in and finds Olive had taken out everyone and John and Poyo didn't have to lift a finger/feather. Mason attempts to drink some of their blood to get a read on the collector but he sees they have been drinking a concoction of Beet juice and other ingredient to block his powers. Olive says she is more powerful and beet juice doesn't stop her. She drinks the blood and tells him she knows all of his bases and where he is currently located.