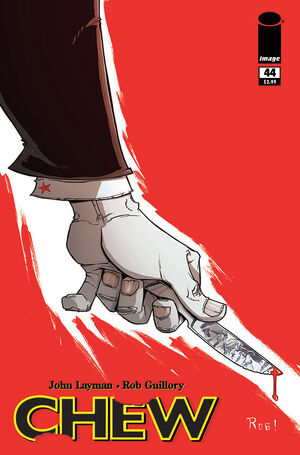 What's the worst that can happen?

Appearing in "Chicken Tenders, Part 4 of 5"

Years ago in China, Mantao Tang was a fierce and powerful warrior. He eventually was promoted to learn Zhandou Wei. He must pass down his skills generation to generation.

Years later, the Collector eats a member with Zhandou Wei. He's soon attacked by the U.S. Food and Drug Administration. He easily bests them in battle until he gets to Olive Chu. He bites her tortilla he was impaled with to learn she is related to Tony and smiles. Mason strikes him to distract him long enough for him to yell at Olive to run.

Earlier that day, Tony Chu spokes with John Colby on the phone. Tony warned John not to go in after the Vampire as it was not how his vision had foreseen it. He knew they'd fail. John tried to warn Mike Applebee but Mike told him they had everything they needed to take him down.

Retrieved from "https://imagecomics.fandom.com/wiki/Chew_Vol_1_44?oldid=68150"
Community content is available under CC-BY-SA unless otherwise noted.