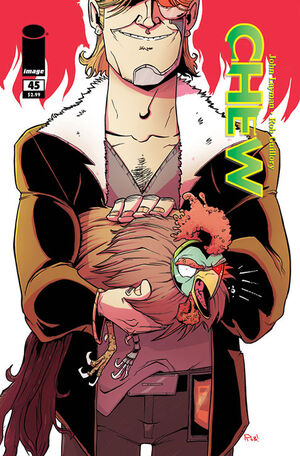 Appearing in "Chicken Tenders, Part 5 of 5"

Paneer Sharma attempts to stay connected with various Chu family members. He recall the last promise that he made to Toni Chu was to watch over Tony no matter what. One of his subordinates breaks into the office to tell him that one of their tracking devices picked up something.

Elsewhere, the FDA Swat team that attempted to take down the Collector[1] are transported to the hospital.

Earlier, Peneer told his fell NASA members they would monitor the FDA sting and help out if necessary. They watched the FDA case go south and before the Vampire could harm Olive, NASA spacesuits broke into the Collector's house and fired space lasers to save her.

In the present, Tony blows up at John and tells him they are no longer friends. He can't believe he would have put Olive in danger.

John leaves to go to the bar to drink with Poyo. They commiserate and remember all the good times. John tells Poyo he's the best partner he's ever had. He tells him the world has no idea how good he is or what he'll do in the future. He suddenly snaps Poyo's neck and apologizes to the bird.

Retrieved from "https://imagecomics.fandom.com/wiki/Chew_Vol_1_45?oldid=52348"
Community content is available under CC-BY-SA unless otherwise noted.