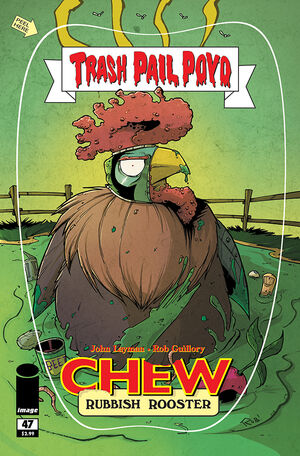 Get the hell away from her.

When John arrives at the trashcan, he pulls out the bird and Tony pops out and places him under arrest for the murder of a federal agent.

John wakes up from his dream in his apartment in a cold sweat. He walks into work and Breadman orders him to investigate Poyo just like he did in his dream.

Meanwhile at Our Lady of the Broken Femur Hospital, Tony sits with his wife and daughter. Tony is called into work. He hugs Amelia Mintz goodbye. She tells him she'll stay watch over Olive Chu while he's out. As Tony leaves and Amelia's back is turned, Olive snaps her head as she was pretending to still be asleep.

Tony stops by Mason Savoy's room as he leaves. As Mason is still passed out, Tony threatens him for taking his ear, his daughter, and his partner from him. As Tony leaves, Mason snaps his head towards him revealing that he was still awake as well.

As Tony arrives at work, Deshawn Berry quickly rebuffs him and asks where he's been as they have work to do. He explains that the Bon Vivant group has returned. This time they have gone legit and donate large amounts of money to get their specimen. This time they found a large dinosaur. Deshawn tells him he believes the man pulling the strings is Benjamin Davis Hanna, a known Vectulactirutare, able to create noxious gas from spoiled milk. When they enter the building, Tony overzealous, pulls out his gun and tells Benjamin to freeze when he sees he has no milk nearby. Benjamin burbs and Deshawn tells Tony he didn't let him finish. He thinks he's really a vectuciborutare, able to create noxious gas based on the age of what he eats. Deshawn punches Benjamin out and they arrest him.

As they return to Headquarters, Tony gets a call from Nurse Daggertooth. She tells him that Mason Savoy has abducted his daughter and wife.

However, what really happened is Amelia stepped out of the room for a bit. While she was gone, Mason attempted to sneak in. When Amelia returned, she began to attack Mason.

Retrieved from "https://imagecomics.fandom.com/wiki/Chew_Vol_1_47?oldid=53209"
Community content is available under CC-BY-SA unless otherwise noted.