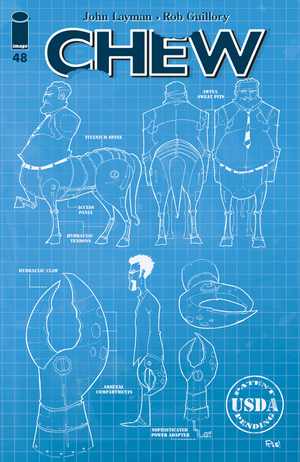 If Olive goes after him, she won't survive...

At Our Lady of the Broken Femur Hospital, things look bleak for the FDA survivors. Director Penya breaks into Mike Applebee's room. She delivers plans to reconstruct Mike and Caesar Valenzano as a cybernetic centaur and lobster to save their lives.

Applebee and Valenzano walk out in their new bodies and are laughed at by the USDA members. Director Breadman informs Applebee he's welcome to come back to the FDA, however, he is no longer a Director due to his poor choices.[1] John Colby arrives and is surprised that he is part horse. When Applebee asks if this will be an issue between them, John asks if he's anatomically correct like a horse as they walk off kissing and hugging.

Breadman and Valenzano leave them and enter the room where Tony Chu tastes some of the spilled blood on the ground. He has a cibopathic vision to see what really happened with his daughter. Olive Chu woke up and ordered Amelia Mintz to stop. She told them with a renowned sense of purpose she was going to take the Collector down. He also saw in his vision his daughter was embarrassed to tell her father and wanted to keep it a secret from him. He felt shame for not being connected with his daughter. As they left, Amelia refused to let her be along with Mason so she went with them.

Meanwhile on a plane, the Vampire receives a phone call via Jelly. His Gelatusdefero communicates to him via Jelly. He tells the Vampire Collector that Olive and Mason left the hospital. He orders them to find the girl, Olive, and bring her to him. The group assembles the Jellassassin to take them down, a group of individuals powered by Jelly.

Tony has a vision about how Olive took down the Jellassassins and sent the Collector a message. He's concerned as this isn't the way to take down the Collector per Toni's message.[2] Tony approaches John for help. He appologizes for being a jerk and wants to team up. John realizes how he can help and rushes to get Poyo's body which he had prepared to increase Tony's fighting skills.[3] However, upon arriving at the trash can he finds that the trashman has already taken out the trash and Poyo's body is nowhere to be found.

Retrieved from "https://imagecomics.fandom.com/wiki/Chew_Vol_1_48?oldid=53178"
Community content is available under CC-BY-SA unless otherwise noted.