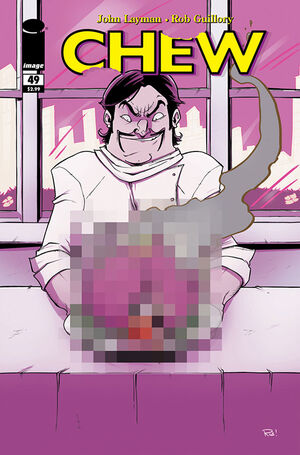 John Colby stops by Chow Chu's home. He knocks on the door claiming it to be a matter of national emergency. When Chow opens, he asks if he'll cook Poyo for Tony Chu. Chow refuses but John tells him it's for revenge on the Collector and revenge for Toni. Chow finally agrees and starts prepping the dish.

Meahwhile at the Granger-Coulibiac International Telescope, the Collector stops by with his minions. They kill the staff employees and take over the facility. The Collector things they will have at least a week before they are discovered.

Meanwhile, the FDA looks into cases. They find the Collector has murdered his Jellassassins and continues to grow stronger. Tony excuses himself to take Valenzano with him to take out the Collector's minions. Director Breadman informs Deshawn Berry that his new partner will be Vorhees while Caesar is out with Tony. Vorhess speaks for the first time.

Elsewhere, Team Olive takes down the Collector's men all over town. Until they reach one of his generals who knows where the Collector is located. Olive licks his blood to discover the Vampire's location. Tony suddenly breaks in and tells Olive to freeze. He tells them he knows how to take the Collector down and this isn't the way. They all agree and retire home.

That night, John stops by with Poyo's cooked body and offers it to Tony to eat, which Tony already knows is the only way to take down the collector -- gaining Poyo's fighting skills and anger.

Retrieved from "https://imagecomics.fandom.com/wiki/Chew_Vol_1_49?oldid=68152"
Community content is available under CC-BY-SA unless otherwise noted.