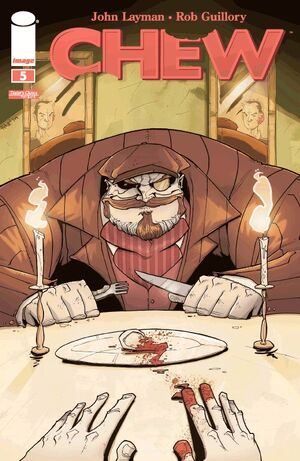 Following his tip from Chow[1], the U.S. Food and Drug Administration raids Montero Shipping. Tony and Mason find Chow tied up in a vault with hundreds of live chickens. Savoy congratulates Tony as this is one of the biggest busts the FDA has ever had.

Suddenly a perp, unnoticed by the FDA, pulls a gun on Tony and says he'll be rich to collect the bounty on his head. Mason jumps in the way to take the bullet and takes the perp out. Tony tells Mason he had blood in his mouth from the gun shots and knows that man who was going to shoot him was the man responsible for the murder of Evan Pepper.[2] Tony says there was something else, but it was just a flash of white that he couldn't quite make out. Mason tells him to go home and get some rest.

At his apartment, Tony abruptly wakes up recalling what the flash of white was. He heads to evidence to take a bit of the dog collected from evidence by Mason earlier.[3]

The next day, Tony waits for Mason to come into the office and tells him he's under arrest for the murder of Evan Pepper. Mason tells Tony it was a calculated risk as he's researching why the government made chicken illegal. He believes it was a cover-up. After a brief struggle, Mason bites off Tony's ear and keeps it as insurance. He realizes he now no longer can work for the FDA and runs into hiding.

Retrieved from "https://imagecomics.fandom.com/wiki/Chew_Vol_1_5?oldid=45185"
Community content is available under CC-BY-SA unless otherwise noted.