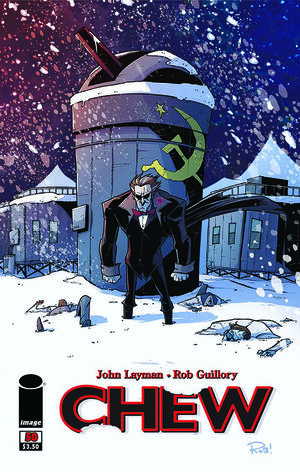 The Collector prepares meals to strengthen himself and his crew. Tony Chu arrives and takes down all of his minions easily with the newfound power from eating Poyo. He uses a chocolate knife made by Olive Chu to kill the Vampire. He snaps his neck and prepare to finish him when the Collector expects to be eaten by him and make him invincible. However, Tony says he doesn't want his memories and decides to feed him to the rats after killing him. The Collector pleads to be left alive as he can explain the fire-writing in the sky. Tony doesn't listen and stabs the Collector in his head.

Tony emerges from the station and hugs his friends now that it's over.

In Hell, Satan meets the Collector. Satan tells him he's no longer the ruler of hell and points to Poyo instead.

Retrieved from "https://imagecomics.fandom.com/wiki/Chew_Vol_1_50?oldid=53475"
Community content is available under CC-BY-SA unless otherwise noted.