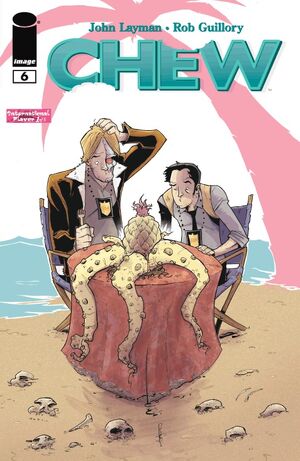 On an island where a new resort is being constructed, several constructions workers stand around a newly discovered fruit trying to figure out what it is. One worker remarks he doesn't think it's edible.

At U.S. Food and Drug Administration Headquarters, Tony Chu and John Colby physically push each other around threatening each other to stay away. Mike Applebee walks in and announces to their chagrin that they are new partners and have to work together. No one wants to work with Tony since he snitched on Mason Savoy,[1] and John is the new guy on the squad so he's stuck with Tony. John reveals to Tony that he joined the FDA in agreement that they would fix his face with cybernetic enhancements. Tony complains to Mike that his ear replacement from being bit off doesn't even match his face color.[1] Mike tells him it was a clerical error and sends them on a job requiring Tony's skills.

On the walk to the car Tony and John complain to each other and then stop, pause, and burst out laughing. They say it is just like old times as they speed off and are happy to work with each other again.

At Citizen's Savings bank, the bank owner walks them to the vault where a huge pile of steamy dung sits in the middle of the floor. Tony realizes Mike sent him on the case to eat the dung. John calls the boss and tells him Tony will eat it and the boss gives them to the end of the day. Tony is pissed as he says he won't eat it and this isn't a good way to get back at him, but John remains level-headed and tells him they'll do this old-school investigation style like the old days. He tells him in reality, he bought them until the end of the day at least.

John starts quick talking with the owner, telling him he wants tails on employees, phone calls looked at over 8 minutes, and generally to 'stir the pot'. When the deputy tells him he can't as he has no court orders, John continues his quick talking about rules not applying to FDA and deputizes him as temporary FDA. John takes Tony out and tells him he has a surprise for him.

John knocks on a door to reveals D-Bear. When D-Bear attempts to run, John tackles him, and holds him to the wall to inform him he's connected with the FDA with his cybernetic facial implants. D-Bear wets his pants. John says he better start handing over the money he gets on the take from the FDA to feed them information,[2] or else and then throws D-Bear out the window onto the car.

At a bar, John downloads information from the deputized officer at the bank by pulling out a cord from his head to plug into his phone. They find teller David Graham was on vacation twice this week, who has a brother named Randy Graham, who went to school with Edward Fry. Tony recognizes Edward Fry as the guy who was on probation for an armored car heist. They then spot a huge marina bill for an unemployed ex-con.

At The Marina, they bust in on five men who have a pile of money in a room and are about to eat chicken soup. While making the arrests, Tony tries the soup and tells him it's not chicken, it's a plant.

Retrieved from "https://imagecomics.fandom.com/wiki/Chew_Vol_1_6?oldid=45186"
Community content is available under CC-BY-SA unless otherwise noted.