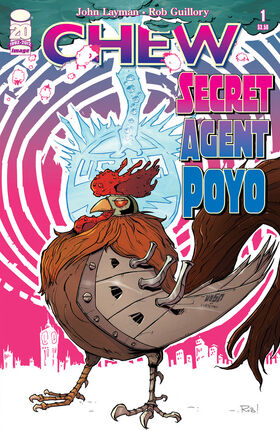 Poyo is being operated on by the world's top surgeons after being shot by General JonTongJoo.[1] He is outfitted, by executive order of the president of the America, with a thermo-nuclear bionic heart.

Meanwhile, Poyo is dead and in Hell. Satan has ordered he be punished but all of the hell-hounds and minions have been quickly dispatched by Poyo.

The surgeons pull down on power switch to turn on his heart which blacks out the United States of America.

In England, DEFRA agents are investigating the town of Freeholdshire-Upon-Marsh where it is raining sheep. Nearby Albrecht Regenbogen has unlocked the secret to make it rain animals and is holding the world hostage.

Agent Barnes attempts to infiltrate with his partner, Poyo. When Agent Barnes is held up, Poyo goes crazy to attack the warlord killing Regenbogen.

Poyo finds the hallucinogenic Chogs and falls in love with them.