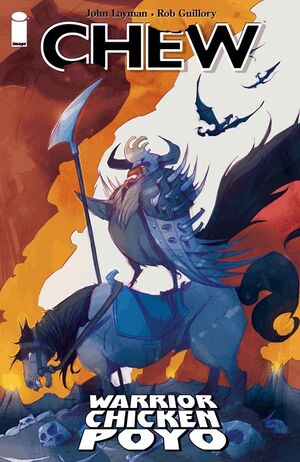 Exactly where he needs to be. Wherever there is evil. Or injustice. Or some rotten sonofabitch needin' his fucking ass beat.

In Washington, D.C., E.G.G. Terrorists have kidnapped the president. They inject him with a deadly plague of micro-nuclear-battle-nanites. Poyo is sent in and quickly murders the terrorists.

Director Penya soon arrives and they agree to shrink down the size of Poyo to infiltrate the President's blood stream to destroy the virus and save his life. When he destroys the virus, the world rejoices and has a parade for Poyo. However, Penya tells everyone the Poyo in the parade is a stand-in. The real Poyo has already been dispatched to another place for another crisis.

Later the king crowns Poyo as the new king of Yoek. However, he's warned by the mage that it is just a stand-in. The real Poyo has already been transported to fight his next source of evil.

Poyo stands out in the The Walking Dead universe ready to battle the zombie hordes.

Retrieved from "https://imagecomics.fandom.com/wiki/Chew_Vol_1_Warrior_Chicken_Poyo_One-Shot?oldid=52294"
Community content is available under CC-BY-SA unless otherwise noted.