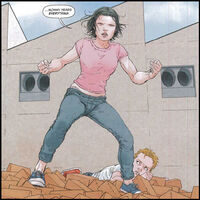 Chloe is the daughter of Sheldon and Grace Sampson and the elder sister of Brandon.

As children, Chloe and Brandon were taught to keep the secret identity hidden from all others, which led both children having identity issues, develop feelings of inferiority from their parents and as young adults into therapy because neither could achieve their parent's approval.

Also as an adult, Chloe became a spokesperson for several charities that helped benefit the world in a vain attempt to her parents acceptance, which she felt she never received. This behavior led her into heavy drug use and into unstable sexual relationships with men with shady characters.

Chloe's uncle Walter attempted to murder her as he did her mother Grace, but she was saved by her lover and future husband, Hutch. Hutch teleported her all over the planet in an attempt to escape the heroes under Walter's telepathic. Brandon later murdered their father after he had been beaten severely by almost every superhero on the planet.

In Australia, the two were married and began a new life together living as far off the grid as possible in order to not be detected by her uncle and brother. She gave birth to a son named Jason and when he was old enough went to work in a pencil factory.

Retrieved from "https://imagecomics.fandom.com/wiki/Chloe_Sampson_Hutchence_(Jupiter%27s_Legacy)?oldid=68830"
Community content is available under CC-BY-SA unless otherwise noted.