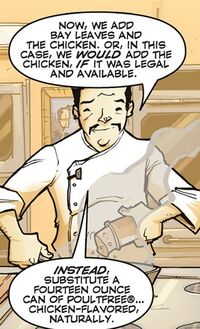 Chow Chu was a major food TV chef until he had a breakdown about the U.S. Food and Drug Administration and the government making real chicken illegal.[1]

Chow disagrees with the U.S. Law to ban poultry and moved to Yamapalu to continue cooking chicken.[2] Chow also prepared the family turkey for Thanksgiving despite the ban on poultry.[3]

Later, John Colby stops by Chow's apartment. He asks if he'll help him cook Poyo. Chow refuses at first, but John tells him it will help Tony get revenge on the Collector for killing Toni Chu. Chow agrees and uses his cooking skills to cover up the flavor of the rotten meat.[4] Later, they feed the chicken to Tony Chu to grant him the powers he needs to defeat the Collector.[5]

Retrieved from "https://imagecomics.fandom.com/wiki/Chow_Chu_(Chew)?oldid=53476"
Community content is available under CC-BY-SA unless otherwise noted.