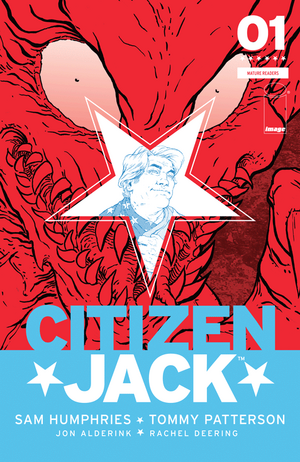 Jack Northworthy, a Minnesota snowblower salesmen, sits on his snowblower blocking the way of a city plow. He pulls a gun and tells them to stop pushing 'his snow.' Adam, the city employee, tells him he's just following the Mayor's orders. Jack turns on his snowblower and buries the man in snow as he holds a gun to him.

Later, Jack drinks away his problems at his Snowblower Store. His demon-like friend, Marlinspike lurks in the shadows and asks him if he's considered his deal. Sign himself over to him and he'll make Jack the president of the United States of America.

Jack recalls how as a child he grew up playing hockey. When he was injured, he had to give up his dreams.

Later at Musk City Hall, Jack sits in the Mayor's office in his pink bathrobe. He tells her he used to run things differently when he was mayor and requests that she wait a couple of hours before starting to plow as it hurts his snowblower business. She tells him she won't help him make a quick buck and throws him out.

Later, Jack approaches his dad. He was out in the wilderness hunting ducks and was not happy to see Jack. Jack asks his dad to pressure the mayor as a retired sheriff. After he tells Jack that he was a failure as a son, he tells him he refuses to help him as well.

Later, Jack announces his decision to run as president and performs a polar bear dive into freezing water while several civilians film the event. The civilians are dubious of his claims and bring up several of his past events where he was accused of illegal activity. Jack asserts that Americans are forgiving as he dives into the ice-cold water.

Later, Jack watches the news show, Straight Talk, and is excited to see his announcement as candidate made the show. However, things turn sour as he's announced as the "dumbass of the day" and storms off upset.

Meanwhile, Donna Forsyth arrives in town and finds Jack. She tells him she will be his new campaign manager and will help him in his campaign. While at first dubious, Jack eventually comes around to seeing her help when she shows him she has signatures to admit him and on TV he's shown as having 2% of America's vote. He jumps for joy as she steps back outside to grab more things. From the shadows, Marlinspike emerges and tells him he can make president happen if he agrees to sign a contract with him. Jack agrees and Marlinspike marks him with a symbol on his chest.

A HORROR-COMEDY FOR ANYONE WHO HATES POLITICS! Every presidential candidate has a skeleton in their closet—Jack Northworthy worships the devil! A scandal-plagued, small town politician, Jack should in no way be president. But he's got a secret weapon: Marlinspike, a malevolent demon of high ambitions. Together, they're running for president in an outrageous campaign that America will never forget! Blockbuster writer SAM HUMPHRIES (Guardians of the Galaxy, X-Men: Black Vortex) and New York Times bestselling artist TOMMY PATTERSON (Game of Thrones) debut a brand new ONGOING SERIES with a DIABOLICAL EXTRA-SIZED FIRST ISSUE!

Retrieved from "https://imagecomics.fandom.com/wiki/Citizen_Jack_Vol_1_1?oldid=55881"
Community content is available under CC-BY-SA unless otherwise noted.