"The Return of the Goon" 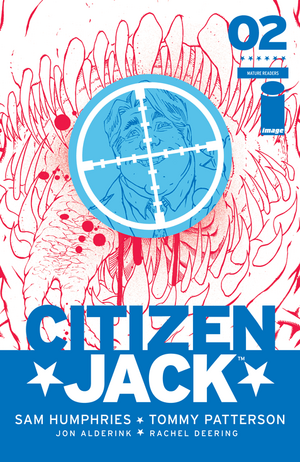 Get fired up, Jack. Now the real right begins.

Appearing in "The Return of the Goon"

Plot Synopsis for "The Return of the Goon"

Mr. Bollinger follows Jack Northworthy very closely. Even though the man is complete blunder, he tells his assistant Jenkins to keep funding him with money.

Meanwhile, Donna Forsyth struggles with Jack's ratings as he is falling behind on electability. Jack heads to his bus where he speaks with Marlinspike. He tells him he needs to win his election and he needs him to do his magic to make it happen. Marlinespike tells him to head to Ohio even though Donna was telling him they'd need to head to Iowa next. Jack agreed and he looked forward to seeing his old hockey teammate, Trey Mortland, who is the mayor of Soupe. Donna watched from the road as Jack seemed to talk to himself as she could not see Marlinspike.

Later, Jack arrives and gives a speech to Soupe with Mortland standing next to him. It appears to be a complete disaster as no one has shown up for his speech. Suddenly, a man pulls a gun and shoots Mortland, dead. Instead of running or having security guards jump in, Jack leaps towards the man and disables him as he is also shot.

Later, Jack wakes up in the hospital and finds his electability score has skyrocketed to match his opponents. Marlinspike stands over him and Jack asks if Mortland had to die.

America meets Jack, as his demon plays a lethal game.

Retrieved from "https://imagecomics.fandom.com/wiki/Citizen_Jack_Vol_1_2?oldid=55875"
Community content is available under CC-BY-SA unless otherwise noted.