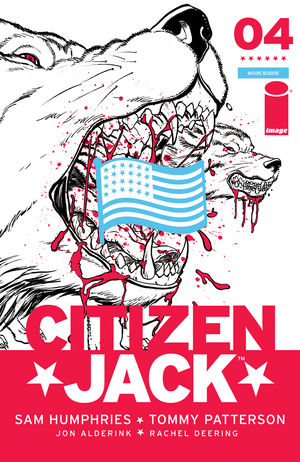 I'll help you. We'll do it together.

Appearing in "Devil Inside"

Plot Synopsis for "Devil Inside"

Years ago, Jack Northworthy was playing in the finals of a hockey league. His dad encouraged him and told him to win for a second year in a row and he'd be so proud. However, when he started playing, his head was smashed against the ground and he was taken out of the game and probably wouldn't be able to play again. However, all Jack could remember was that his Dad left and didn't even finish watching his son play. Marlinspike appeared before Jack as he was a haze, laying on his back. He told Jack he'd take care of him and wouldn't let him down.

Twenty years later, Jack reminisces about the events. He snaps out of it and finds his manager, Donna Forsyth, grilling him in preparation for the big debate with Charlotte Pickens. Jack's vision is blurred and he sees through a purple haze as Donna tells him he needs to prepare his lines that she's written for him. Jack's dad suddenly bursts in and tells him to take a break and have a steak dinner with him. The crew worry as he needs to prepare for the debate.

At Jack's dad's house, Jack is mesmerized by his dad's barking dogs. His dad tells him that he keeps them hungry in case he needs to set them loose. Jack's dad begins telling him how they're going to run the country together and how he's made him proud. However, Jack snaps out of it and tells him he's not on the team and there is no 'we'. He gave that up when he gave up on him years ago. He reminds him that he was impeached to protect his father.

Jack storms out and walks past a store where there is a book written by him. He doesn't understand how that could have happened. He begins to see the cover come to life and the purple haze returns. He screams out for Marlinspike to help him with the debate. Marlinespike arrives and tells him he needs a human sacrifice to continue.

At the debate, Jack continues to hallucinate. Eventually he believes Charlotte has taken Marlinspike from him and goes crazy and attacks the host of the debate.

Later, Donna fields questions from rabid reporters looking to deface Jack. She receives a call from Helena that she founds two hits for the name Marlinspike. Both were related to cults where people were sacrificed. A sudden knock at the door prompts Donna to hang up. She opens the door and finds Jack standing there. Unknown to her, he has a gun stuffed in his pants with plans to kill her for Marlinspike. She told him she isn't giving up on him and will continue to fight for him. Surprised that someone is sticking with him, he changed his mind and decided not to kill her. A newsflash hit their phones and they see a scandal involving Jack had been released.

Jack trudged over to his father's house and blames him for releasing the scandal even though he knew it was Pickett. He releases the dogs and let them attack and kill his father. Marlinspike suddenly returns and said he'll start helping Jack again.

Retrieved from "https://imagecomics.fandom.com/wiki/Citizen_Jack_Vol_1_4?oldid=67819"
Community content is available under CC-BY-SA unless otherwise noted.